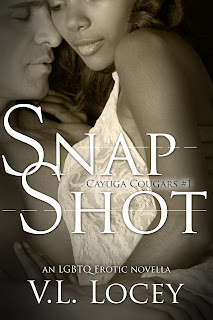 Snap Shot is the opening salvo in V.L. Locey's Cayuga Cougars series, which is a spin-off of her Point Shot trilogy, wherein Mario McGarrity was one of the supporting characters, having been on the same team as the main characters, Victor Kalinski and Daniel Arou, who are now happily married. Also part of the third book then was Lila, a transgender woman, and she and Mario were already a couple sorts back then and here in the first book of the spin-off, they're still very much together, although they do live in separate places--she in Aberdeen, he in Cayuga. There's no doubting how devoted Mario and Lila are to each other, making time to be together whenever possible. When Lila's past makes its presence felt in a way Mario never expected, not only is he forced to decide whether to have himself traded in order to be closer to Lila but he also needs to figure out if Lila's past will affect their future.

This was a quick romance and one that I enjoyed for the most part. Mario and Lila were a loving couple who loved and accepted each other without any reservations. But before Lila became who she is today, she had a very different life, one that led to her having a son named Langley, who is now a teenager. Mario and Lila make the necessary adjustments to their life, but good God, Langley was a pain in the ass. I get that his life wasn't all that great, but he was ungrateful and rude, and to be honest, his relationship with Lila wasn't as satisfactorily resolved as I would have liked. I would have also wanted to see some back story as to how Lila and Mario became the committed couple that they are today rather than to simply go into with them being lovey dovey and hot between the sheets. Still, I liked Snap Shot far more than I did the Point Shot books (no thanks to Vic), so this gets 3.5 stars. ♥