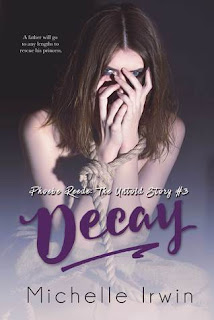 Told from the point-of-view of Declan Reede, father to Phoebe Reede and whose own story alongside Phoebe's mother is told in the original series Phoebe's was spun off of, Declan Reede: The Untold Story, Decay shares the same basic story line as that of Beastly. While I don't feel this is a necessary read in order to have a full understanding of Phoebe's story, I do think that fans of both the original and the spin-off series will consider this a must-read. It also allows you to have a better appreciation of what exactly Declan is going through as he and Beau Miller--Phoebe's boyfriend--search for her after she goes missing. Michelle Irwin's writing, as always, makes you feel as if you're right there, alongside Declan as he races against time to locate Phoebe. The desperation gets to you because it doesn't really take a lot for you to imagine the terror a parent may feel to be in the same position. I've never read Declan's series, but it's definitely on my to-be-read list, especially since Irwin has more than impressed me with Phoebe's story so far. I do recommend that you read the books in order. Five stars go to Decay. ♥