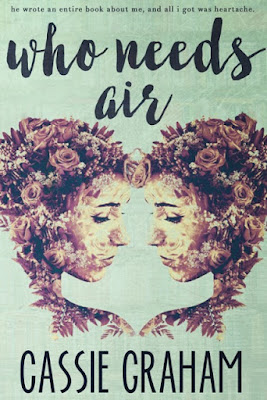 About Who Needs Air
They fell in love at thirteen.
He wrote a book about it at twenty.
She watched him walk away at twenty-three.
And he made the New York Times Best Sellers list at twenty-four.

Campbell ‘Cam’ Potter stood idly by as August Wyatt took over the world one word at a time. Chapter by chapter, people fell in love with the story he created – the events she lived. And now the book was being made into a movie, it was only a matter of time before August was back in their small hometown in Georgia.

The problem was, when August left five years ago, Cam made a promise to herself. The ending in his book would be the conclusion to their story. There was no sequel, no second chance, no possibility of ever seeing him again. He obliterated her heart and she was determined to never let it happen again.

That is, until Cam gets a late night text from the heartbreaker himself.
New chapters are written, fresh storylines are explored and Cam and August find a familiarity in one another. 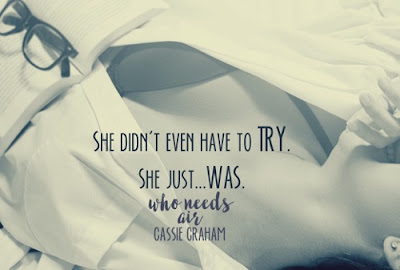 Read my 3.5-starred review of Who Needs Air.

Add Who Needs Air on Goodreads. 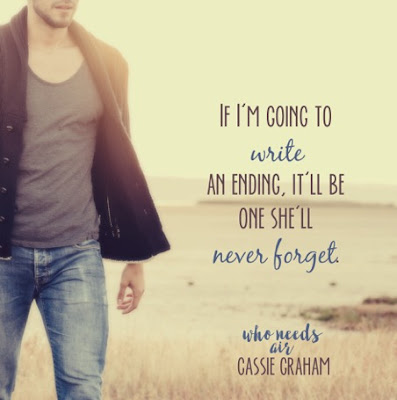 An Excerpt from Who Needs Air
Bringing my body into his with a tug, he squeezes my shoulders. Only, this hug feels different. It doesn’t feel like all the other ones we’ve shared since he came back into town. I’m baffled at first, my arms locked around his torso. He doesn’t let me free and I think he may need this. I think he might need me. He sighs, his face falling into the crook of my neck and I finally understand why it’s so different. I don’t know why it took me so long, but my heart soars and my grip tightens. I force my eyelids closed and I breathe him in, using every ounce of my ability to give him back what he’s offering me so willingly.

He doesn’t have to say the words, but I hear them loud and clear. He’s been looking for someone to care about him in this town. Not someone to fawn over him or tell him what he wants. I’ve shown him that even without the book, he’s still important and this gesture – his foreign and surprising hug – is his way of telling me he appreciates it.

He clutches the back of my neck, his signature grasp, and breathes me in as I cling to his sweater, willing my eyes to stay closed. If I look at him or our reflection in the mirror above the headboard, I’m going to lose it.

Sighing contently, he pulls back and I do the same, opening my eyes.

“Night,” he offers with a smile, bringing his lips to my forehead for a split second before turning around and sufficiently closing me out, unzipping his bag.

I blink a few times, speechless as I watch him pull his sweater up and over his head, tossing it on the bed. His muscles strain and the dimples just above his pant line are so pronounced, my fingers ache to touch them. I turn away, reminding myself that we’re just friends. Friends only, Cam. Hands off. No touching his back dimples. It’s inappropriate and…oh, God, he’s unbuckling his pants.

Walking out of the door with embarrassed haste, I close it behind me.

My skin, tingling and hot, I trace my forehead with my fingertips. The prickle of his kiss still evident. Eager to erase the aftereffect of his touch, I scrub my head like a moron, accidentally creating a deep red spot. It doesn’t help. My skin scorches for long minutes.

After changing into pajamas, I climb into bed and wrap myself in the comforter. I need to sleep and forget the last three hours happened.

Just as I’m about to shut my eyes, my phone goes off with a text message.

August: Tonight was exactly what I needed.

Another one comes in.

August: You’re still so important to me. Please don’t ever forget that.

I chew on my lip and study the words until they become indecipherable. Turning on my side, I plug my phone into the charger and close my eyes.

I’m in so much trouble. 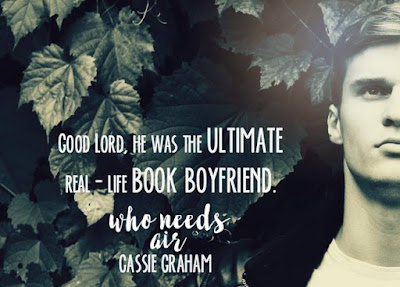 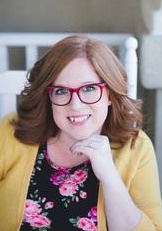 Cassie Graham is a sassy redhead who lives in Arizona with her handsome husband and beautiful daughter. If she isn’t shoulder-deep in writing a book, you can find her watching Supernatural or reading a delicious romance by one of her many talented friends. She likes front porch sitting in her pink rocking chair, drinking Moscato, chocolate, reading books with her daughter, and constantly dating her husband.