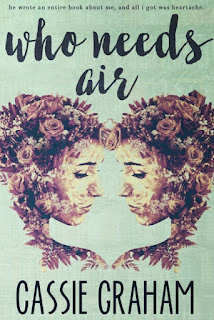 Who Needs Air was a second-chance love story from a new-to-me author, Cassie Graham. It's the tale of Campbell Potter and August Wyatt. They were very young when they were first fell in love at thirteen, but it was the truest kind of love, one that Cam believed would last them their entire lifetime and beyond. That is, of course, until August walked away from her and their hometown to pursue his writing career a decade later. Their story had ended, and just like the bestselling novel that August wrote about their romance, has closed the book on their history. Except she's never really stopped loving August, even as she's tried to move forward with her life with someone else. But at least she's trying. And then August returns five years later, just as his novel is being made into a movie. Naturally, their hometown would be the best place to shoot the film in. Cam knows their paths will cross sooner or later, and she's prepared to keep things purely platonic. But August seems to believe that theirs is a story worthy of a sequel, and if he has anything to do with it, he wants the happily-ever-after they should've had before.

I really, really, REALLY liked this novel...until the last quarter of the way through. Why, oh why, would the author feel the need to throw in a totally unnecessary complication to Cam and August's story? For more drama? To add more chapters and pages? But see, it was already such a fabulous read until she decided to add that wrinkle--and calling it that doesn't even begin to explain how huge of a wrench Cassie Graham threw at the lovers. Why am I as upset as I am? Because August's reaction to the surprise complication was disgustingly cowardly, and whatever points he had earned in my book as he worked his way back into Cam's heart dissipated and went kaput. Making it worse was poor Cam's own reaction. I mean, come on! Have some self-respect, woman! No man is worth allowing yourself to waste your days and weeks and months, hoping and waiting that he'll come back. I can't go into detail because then that would be spoiler central, but suffice it to say that all it took was that last quarter for me to go from rating this five stars to me ending up having no other option but to amend it, so Who Needs Air gets 3.5 stars. ♥

Purchase Who Needs Air on Amazon.