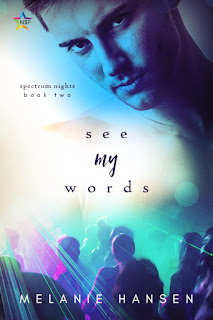 Note: This ARC was provided by NineStar Press in exchange for an honest review.

I have been anxiously waiting for the release of See My Words ever since I finished reading--and loving!--the Spectrum Nights series starter, Pieces of Me. Scott Ashworth and Rylan Mahoney's second chance love story began with how they first met--as stepbrothers--and how Scott left Rylan and the rest of his family behind when he was eighteen. Six years later, their paths cross again in the most unlikely of circumstances. Scott is now a well-known personality in his new hometown of Phoenix, Arizona while also maintaining a strong social media presence. Rylan is an aspiring photographer trying to work on a personal project. They end up working in Spectrum, the club where Scott is an in-demand host and where Rylan becomes its official photographer. The connection that the former stepbrothers had is still there. However, there are things--and people--that appear intent on spoiling their reunion.

One step forward. Two steps back. After Scott is viciously attacked outside of Spectrum, leaving his face bruised and battered--with his jaw broken--Rylan wants nothing more than to be by his side to take care of him. But Scott's physical beauty is what makes him such a draw at Spectrum and with what's happened to him, deals and contracts are put on hold. Scott is filled with self-doubt and can't help but wonder why Rylan would even want to be with someone like him. Rylan, however, wants to show Scott that he's in this for the long haul and he refuses to either be scared away or pushed aside. But Scott's demons are plentiful and his issues are deeply rooted in his very recesses. With jealousy and insecurity rearing their ugly heads, Scott and Rylan may decide their budding relationship is one that's too much work. However, one particular person may decide how to end it...permanently.

Super frustrated. Yep. That's how I felt while reading this sequel. Just when Rylan and Scott would make progress, Scott would purposely sabotage them. Argh! But I got why he was doing what he was doing. Of course, that didn't excuse his bad behavior nor was my frustration level abating for most of the book. That frustration though? It was there because of how emotionally invested I had become with Scott and Rylan. If anyone deserved to have a happy ending, it was these two. They evolved over two novels, and their love story evoked such a clench in my heart. I loved how book two ended, and can I just say that I wouldn't mind if there was a third book that was all about Minh Nguyen and Chris Lavione--and heck, I'm even good with a story about Lance, who I kinda felt bad for after the way Scott treated him. As always, Melanie Hansen has left me more than satisfied. Five stars for See My Words. ♥

Read my reviews for the Spectrum Nights series:

Pieces of Me (book one) - five stars - My Review