Review: Tied to You by Riley Hart (Wild Side #2) 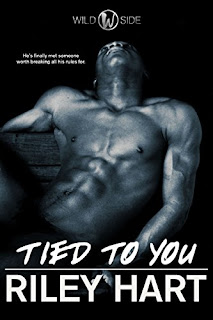 Well, well, well. After that epilogue in Gone for You, I had a feeling Miles Sorenson was in for it and I was right! The focused and controlling lawyer met his match in Quinn Barker, video game designer and tester, and their story in Riley Hart's Tied to You is, hands down, my favorite on in her Wild Side series so far. The West Hollywood Boys, as Wild Side bar owner Dare Nichols has nicknamed the foursome of Miles, Oliver Hayes, Matt Daniels, and Chance (yeah, still no last name), are difficult to not fall for, but even though Miles and Quinn spent one weekend together, it certainly didn't mean the beginning of a love affair and Quinn clarifies that his being at the bar was coincidence and not him stalking Miles. But Quinn has had Miles breaking his rules from the get-go, and now, the more they interact, the more neither man can get of the other. Miles can't wrap his head around the "why" of his need to be with Quinn, and this frustrates him. He's always been the kind of guy who wants answers and relies on facts and logic, but there's so much to the extroverted bundle of happiness that's captured his attention than what can be explained on paper. They may not make sense to some, but Quinn and Miles fill a void in one another they never knew existed. Will their painful pasts and some misguided good intentions lead their budding romance to unravel?

There was always something about Miles that reminded me of myself. Maybe it's his being protective of those he cares about the most, even if that may mean his brutal honesty hurts their feelings. Maybe it's his love for his family and friends while still holding himself back a bit, almost hesitant to fully give anyone every single part of himself for fear of rejection. Whatever it may be, Miles has been a favorite character of mine since he was introduced in the first full-length book, and it was fun watching him evolve and develop once Quinn became a part of his life. Speaking of Quinn, the guy was totally adorable, and he could have been Chance's brother from another mother. He always seemed to have a smile on his face, but his back story was a painful one to read, and my heart went out to him. It's that back story that ties him to Miles, that common factor that bonds them in a way that Miles doesn't with Ollie, Chance, or Matt. I loved how Quinn just seemed to fit into Miles's life, even though Miles wasn't all too sure if that would happen. Quinn's best friend, Christian Foster, was part of the author's Crossroads series so now I've added those books on to my never-ending to-be-read list. I'm curious about Kane though and I kinda hope we'll see him in Chase's story. Maybe? Please?!? One can hope, right?! I'm giving Tied to You five stars. ♥

Purchase Tied to You on Amazon.