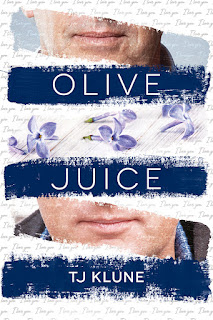 I want to see you.

David wanted to see him too.

He didn't deserve it.

He didn't deserve any of it.

And yet here they were.

Gah! This novella left me in tears and it was poignant reminder of why I'm such a sucker for anything that TJ Klune writes. Olive Juice is a story of love and loss and of redemption and absolution. David has been going through the motions for the past six years, the last two leaving him far more rudderless. With five words, his world shifts a little. What kind of power can a message sent to his phone--"I want to see you"--have on someone like him who is stuck in neutral? He hasn't moved forward and there's no way he can turn back the hands of time and go back to change what happened on March 22, 2012. Can one message--one meeting--help David find his way once again?

The story has a veil of mystery to it, although it isn't all that difficult to figure out how the people who were in David's life are connected to him and to one another. My heart broke for David. It would have been so easy to toss around blame, to point fingers and say that this individual should have done things one way and not another. This book was about David's journey, but it's a journey that he also shares with Phillip. There were times these two frustrated me, but through it all, I cheered them on, especially David. By the end, I could no longer stop the tears. This was a moving short tale, and the words "olive juice" have a whole new meaning. Five-plus stars for Olive Juice. ♥