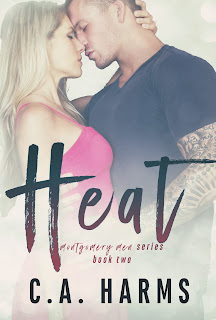 Heat is the second novel in author C.A. Harms's Montgomery Men series and features the youngest among the Montgomery brothers, twenty-six-year-old Beckett. He's a police detective who doesn't have much time for distractions, what more a relationship. When he spies a gorgeous woman across a crowded club, he realizes she could very well the kind of distraction that he wouldn't mind drowning himself in. But then trauma nurse Shanelle Kramer leaves with barely a glance his way. Beckett hopes to see her again...and he does, but it's in a professional setting, with Elle being the victim of a possible B&E. Beckett's protective nature goes into overdrive, but is he willing to risk his job in order to show Elle that this isn't just part of his job and is she ready to trust a man like him?

I've been looking forward to reading the stories of the two younger Montgomery brothers ever since I finished reading the Montgomery Men series starter, Rush, last year, which was about the eldest Montgomery, Ashton. I loved book one, so expectations were high for book two. Beckett was just as much of an alpha as his oldest brother, but it was interesting to see how was in a professional sense because Ashton was wealthy and worldly and owned his own enterprise, and while Beckett wasn't poor, he was working a regular job as a police detective. He had the whole brooding thing that seems to be a Montgomery thing, but clearly it didn't work the first time around with Elle. I liked the banter that the three brothers had going, as well as their interactions with their beloved mom.

While it was pretty obvious from the get-go who the villain was in this story, I did like the element of suspense, though I wish there was more of it. Beckett and Elle had chemistry, but I did feel that there story was a bit rushed for the first three quarters of the book. Lexington Russell was over-the-top hilarious and seeing him push Beckett's buttons was part of what made this a fun read. Elle's best friend, Kim Walters, was also a a good supporting character, and when she and Lex joined forces, it made for some great entertainment. It was nice having Ashton and Kinsley Hellman there as well, and I'm looking forward to seeing what kind of story and what type of woman Knoxville Montgomery will end up with. I still liked Rush more, but Heat was still a very satisfying read at four stars. ♥

Read my reviews for the Montgomery Men series: