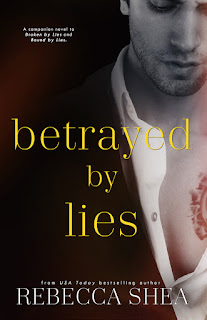 We finally get Sam's story! Yes, Betrayed by Lies is the much awaited third book in Rebecca Shea's Bound & Broken series and it's all about federal agent Samuel Cortez and how he moves forward with his life and finds love in the aftermath of everything that happened in the first two books, Broken by Lies and Bound by Lies. When Sam requests for a transfer from the ATF, he finds himself in Los Angeles. This is his chance to put some distance between him and the woman he fell for--the same woman who was in love with his brother and vice-versa. His new landlord, however, was never part of his plans, but there's something about the cool and confident Kate Stevens that calls to him. She's everything he never knew he wanted or needed. But before he and Kate can have the happy ending they both deserve, fate has other plans for them. This time, however, Sam refuses to walk away.

I was thrilled when I found out that Sam was going to get his shot at happiness because after everything he went through in books one and two, the man most definitely deserved it. I think that he and Kate were perfect for each other. While he may have had feelings for Emilia Adams but those feelings were nothing compared to the emotions going through him with Kate. She was what Emilia wasn't and that was the kind of woman that Sam should have by his side. This was also a far quicker read than I had anticipated, and by the time I had gotten to the end, I was surprised that it had all passed at a faster clip than the first two books. Thankfully, everything is wrapped up in this one book, so there aren't any evil cliffhangers for readers to contend with. Fans of the series, especially those on Team Sam, may get exactly what they've long been waiting for with Betrayed by Lies, which I'm giving four stars to. ♥