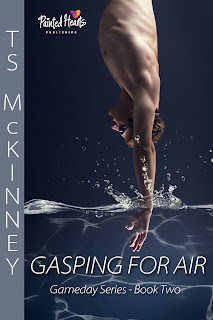 Gasping for Air is the second full-length book but third overall release--following Touchdown and Frozen Hearts--in the Game Day M/M sports romance series from T.S. McKinney. College football star Trystan Matherly is used to having both guys and girls fawn over him. He's never had anyone turn him down and his future is pretty much set, confident that he'll be the first draft pick in the NFL. He's cocky but that's because he knows just how good he is on the field. When he sees mid year-transferee and college senior Dakota Jacobson, he's locked on to the guy he wants in his bed. The thing is, Dakota doesn't give him the time of the day. With a bit of stalking at the aquatic center where swimmer Dakota spends a lot of his time, Trystan soon finds himself actually wanting to get to know the guy, not just get him into bed. But there are dark and deep-rooted reasons why Dakota prefers to keep himself as distant as possible from guys like Trystan. All he wanted to was to finish his degree and leave his painful and traumatizing past behind him, but Trystan is changing the game. Can these two different guys even have a future?

Where to begin... There's no denying that this novel brings with it some very heavy and difficult subjects, particularly that of abuse and rape. The author didn't mince words when it came to certain parts of the story, especially when the victim, Dakota, was with his abuser. The book does come with a warning at the beginning, so if you do choose to go into the story, you should already be aware that there may be things inside that will trigger you. I do think that these types of issues should be tackled because they are very real and because abuse isn't just limited to heterosexual relationships. I do wonder, though, about certain things regarding Dakota's abuser, especially when it came to his access to Dakota. I don't want to get into too much detail since I'm trying really hard here not to spoil the story, but yeah, I would have expected more stringent measures in place. As far as the love story, I liked how Trystan and Dakota evolved as characters once they were together, and I wanted them to get to their happily-ever-after. There were a lot of editing issues, so I'm going to have to give Gasping for Air three stars. ♥