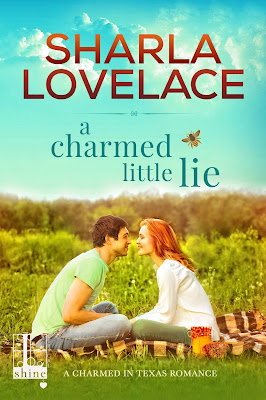 About A Charmed Little Lie
Lanie Barrett didn’t mean to lie. Spinning a story of a joyous marriage to make a dying woman happy is forgivable, isn’t it? Lanie thinks so, especially since her beloved Aunt Ruby would have been heartbroken to know the truth of her niece’s sadly loveless, short-of-sparkling existence. Trouble is, according to the will, Ruby didn’t quite buy Lanie’s tale. And to inherit the only house Lanie ever really considered a home, she’ll have to bring her “husband” back to Charmed, Texas for three whole months—or watch Aunt Ruby’s cozy nest go to her weasel cousin, who will sell it to a condo developer.

Nick McKane is out of work, out of luck, and the spitting image of the man Lanie described. He needs money for his daughter’s art school tuition, and Lanie needs a convenient spouse. It’s a match made . . . well, not quite in heaven, but for a temporary arrangement, it couldn’t be better. Except the longer Lanie and Nick spend as husband and wife, the more the connection between them begins to seem real. Maybe this modern fairy tale really could come true . . . 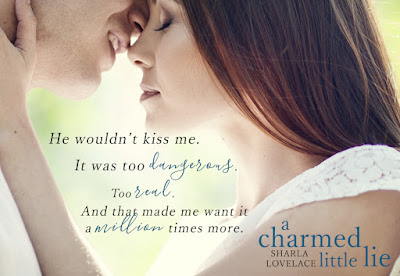 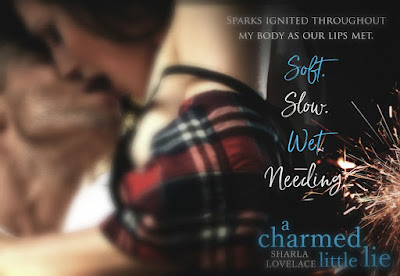 An Excerpt from A Charmed Little Lie
The cake-eating contest was first, and I was playing for the bank. It was my favorite one of course.

“Just because you can make a cake doesn’t mean you can eat it,” I said, rolling my head on my shoulders and popping my knuckles. The four-layer cake in front of me was daunting. I formed a strategy, one slice at a time.

Calling me that sent goosebumps trickling down my spine.

It wasn’t the first time. But something about sitting next to my husband in a goofy town festival cake-eating contest suddenly felt so domestic. So normal and real.

The bell rang, and we were off. We each had knives, but those of us with experience skipped that time consuming task. Hands worked just fine, and going for big bites with minimum chewing was optimal. The winner was Berty Carson from the barber shop, an elderly man who obviously had been practicing judging by the girth around his waist.

Still, I had three-fourths of my cake gone compared to Nick’s little over half.

“What was that, Mr. McKane?” I said, putting my cake-covered hand to my ear. “Was that the sound of losing?”

Nick grabbed my hand and stuck one of my fingers in his mouth, sucking the cake off with his tongue. Everything stopped for me for a moment, the world going on tilt, and he winked as he licked his lips.

Oh, what a dirty, dirty boy. He didn’t play fair. I would so remember that. 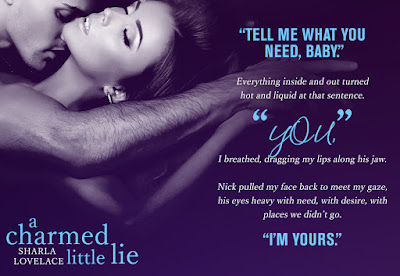 Sharla Lovelace is the bestselling, award-winning author of sexy small-town love stories. Being a Texas girl through and through, she’s proud to say she lives in Southeast Texas with her retired husband, a tricked-out golf cart, and two crazy dogs.  She is the author of five stand-alone novels including the bestselling Don’t Let Go, the exciting Heart of the Storm series, and the fun and sexy new Charmed in Texas series.

For more about Sharla's books, visit www.sharlalovelace.com, and keep up with all her new book releases easily by subscribing to her newsletter.  She loves keeping up with her readers, and you can connect with her on Facebook, Twitter, and Instagram. 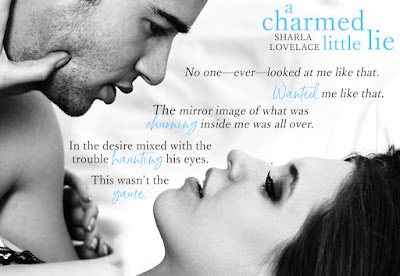