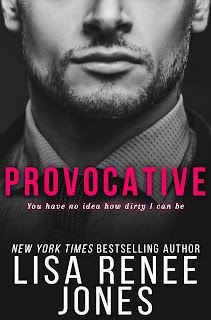 Lisa Renee Jones has done it again, and damn it, I'm hooked to all things White Lies. The title doesn't lie because book one of this duet is, indeed, Provocative. There are ties to the author's other series, particularly, Inside Out, but the only other series I've read of the author's are Careless Whispers and Dirty Money, and yet, I was still able to fully enjoy and appreciate the story she was telling in Provocative. This was every bit as enticing and enthralling as any of the Lisa Renee Jones-penned books I've read before, though can I just say that the evil cliffhanger she's left us with has me desperately wishing time would go faster because the 11th of July is simply too far away for impatient me? Gah! Come on! That's torturous! But if it's one thing I've learned, Jones makes the wait worthwhile.

Aspiring artist Faith Winter has had to put her own dreams on hold as she struggles to clean up the mess left behind by her mother in the vineyard and winery that Faith's father loved. When she meets renowned lawyer Nicolas Rogers, all it takes is one touch for both of them to desperately wonder what it would be like if they simply allowed themselves to let go and give in to the baser needs. All Faith will allow herself is one night, but Nick wants more. He's intrigued by Faith. But his attraction to her is just one of the reasons he sought her out. She may believe that their meeting was nothing more than them being in the same place at the same time, and Nick would prefer it that way. Once she learns what motivated him to find her, he may lose the most provocative woman he's ever met.

I'm going to try and not mention any other details than what I posted in the previous paragraph. Why spoil what's a really great read, right? Let's just say that Nick has his reasons for wanting to meet Faith. He's either going to end up proving his suspicions right or not, but he certainly never expected to be as drawn to her as he is. I loved the sexual tension between these two. It's as if there was no other choice but to become tethered to one another from the moment they met. I think they also both recognize that getting too close or giving in could lead to their respective downfalls. Neither one wants to be vulnerable, but that's exactly what happens when they're together--a vulnerability comes to light. The question is, will one of them take full advantage of it? Five stars for Provocative. ♥