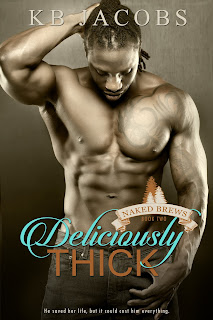 Deliciously Thick is the second novel in the Naked Brews series from KB Jacobs and takes place just as the events in the final chapter of the series starter, Deliciously Smooth. Book two is the story of twenty-two-year-old Naked Brews resident accountant and book lover Melissa Frye, who was in the building when the brewery and bar went up in flames at the cliffhanger of an ending for book one. She's rescued and her hero comes in the form of twenty-five-year-old professional and champion snowboarder and celebrity Anthony Millet, more popularly known by his nickname "Triple B", aka Bad Boy of Boarding. They're opposites who fake a relationship and end up falling in love.

Anthony clearly lives up to his moniker, hosting parties at his spacious home whenever the mood strikes. His persona is a necessary tool in order to keep his brand out there. When he rescues Melissa, the girl he can't help but spy on ever since he saw her reading through her apartment window, he ends up badly spraining his ankle. Not being able to compete has some of his sponsors leaving him high and dry. So, what's the best way to keep him in the public eye while also mending his tarnished reputation when news that he was drunk the night of the fire come out? Fake being with his damsel in distress, of course! If only he can keep faking his growing feelings for her...

The more time Melissa spends around Anthony, the more she realizes that she doesn't like his persona, but she's falling for the man himself. But it isn't always easy to separate the two, not with so many people demanding his attention and his needing to keep the spotlight on him. He makes her fantasies come true, but how much of what's developing between them the real thing and how much is purely for public consumption? With the need to rebuild Naked Brews and trying to avoid the sudden reappearance of someone from her past, Melissa needs to decide if she can risk her heart on a man who is nothing like those book boyfriends she reads about in her romance novels.

There were moments in the first few chapters where I seriously wanted to smack Anthony, but the guy won me over. I think KB Jacobs did a fantastic job developing both the story and the characters. The spotlight truly was on Anthony and Melissa, so I did find myself wishing that there was a bit more focus on what was happening with Naked Brews since the brewery is supposed to be the true backdrop for the series. This does end in a cliffhanger of sorts, so I'm definitely looking forward to reading the third book in the series, Deliciously Bitter, and shall be checking out the free prequel novella, Desperately Unprepared, while waiting. Deliciously Thick receives 4.5 stars. ♥

Read my reviews for the Naked Brews series: