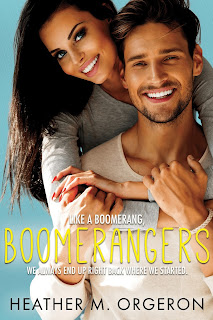 
Taking her tiny hand into both of mine, I lift it to my chest, placing it right over my racing heart. “You feel that?” I rasp, swallowing hard. Her head bobs. “That’s yours. It’s always been. So, the next time you try to convince yourself that you know what’s best for me, I want you to remember what you feel when we’re together.” I touch the pads of my first two fingers to her neck, feeling her pulse flutter against my skin. “I feel it, too.”

Spencer raises her hands to cradle the sides of my face. “I’ll remember,” she whispers, blinking away tears.

Heather M. Orgeron impressed me with her debut release last year, Vivienne's Guilt, and when I saw the synopsis for her latest standalone, my curiosity and my previous reading experience combined made this a no-brainer as far as reviewing was concerned. Boomerangers is the second-chance love story of single mother of three and sex therapist Spencer LeBlanc and her high school sweetheart Cooper Hebert. They were eighteen and very much in love when Cooper made a decision that he thought was best for them--one that he believed would reinforce their being meant-to-be--but only led to two broken hearts. Spencer went on to marry and divorce before the birth of her twin sons and then having another son with another man less than three years ago. Cooper married a woman he never truly loved and is now divorced. When he returns to his hometown to live with his parents, he discovers that Spence and her kids are back with her parents as well. Being neighbors puts them in constant proximity to each other, and maybe they could have a shot at love again, but can they get over their hang-ups to get to forever?


This book brought a smile to my lips and enticed a laugh out of me more than once. Neither Coop nor Spence were perfect people. They made mistakes, made choices that they believed were best for them, mostly out of self-preservation, but they were, at their very core, good people who loved their families and who, whether they wanted to admit it or not, never loved anyone else the way they loved each other fifteen years ago. I liked that there wasn't this seamless transition from the people they were when they saw one another to the people they essentially become by the end of the book. Their journey to happily-ever-after was messy, full of mixed signals, fraught with miscommunication, and at times, even stinky. But then, nothing worth having comes easy. The heart of this story was all about family and that was what Coop and Spence were looking for for themselves as well--something that they already had with their own parents. With a strong and well-written story and well-crafted and unforgettable characters, Boomerangers is easily one of my favorite reads this month. I'm giving this five-plus stars. ♥