Review: The Hot Shot by Kristen Callihan (Game On #4) 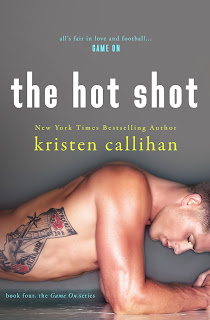 Throat burning, heart threatening to turn to mush, I can only look at him and sigh. “Finn, what am I going to do with you?”

His smile is an easy glide, but his eyes hold mine a beat too long. “Keep me. I’m pretty sure I’m good for no one else.”

Oh my. I have myself a new book boyfriend and his name is Finnegan Mannus, though I prefer to call him "My Finny". Le sigh. Finn was like...everything! The guy had me swooning, and try as she might, Chester Copper was swooning right alongside me. Finn and Chess. Chess and Finn. These two, along with their friends-to-lovers story, has rocketed The Hot Shot, the fourth and latest novel in bestselling author Kristen Callihan's football romance series, Game On, my newest favorite read for 2017. This had everything I could want in a love story, a journey of two people who meet as virtual strangers and decide to set aside their mutual attraction in favor of forging a deep friendship. But the heart can only be denied for so long, right? Only not all stories get wrapped up complete with a big bow on top, and these two have their issues. They will have to trust and fight for what they want--one another.

Finn Mannus--known as Manny in the world of professional football--is considered one of the best quarterbacks in the sport. He's excellent at what he does and he's his team's leader, which means he carries a great deal of responsibility on his shoulders. He doesn't have time--nor does he want to make time--for relationships, but meeting professional photographer Chess Copper has him rethinking what his type of woman actually is. Why? Because Chess is the antithesis of the woman he usually goes for. She isn't taken by his pretty boy looks or the fact that he's rich and a sports superstar. Finn likes it--her--a lot. But he doesn't want a hook-up. He wants to get to know Chess, and they become friends. When a fire leaves her homeless, they become roommates. Living together, however, has Finn no longer able to hold his feelings at bay. He wants Chess. Can he convince her to take a chance?

I must admit that I was surprised by the direction the book took, but that's not a bad thing. I dug in and knew I was going to be in for the long haul from the moment Chess took one look at Finn and called him on his asshattery before their scheduled photo shoot. As these two got to know each other, so did readers, and because we saw them at their best and their most vulnerable, it becomes way too easy to find yourselves invested in these two crazy characters. There's a simplicity and honesty that Finn and Chess share between them. Things aren't complicated...until they make it so, and gah! How these two frustrated me with their lack of communication and making assumptions, and you know what they say about that! But I adored them and their story and Kristen Callihan has become a go-to author who continues to impress. The Hot Shot more than satisfies at five-plus stars. ♥