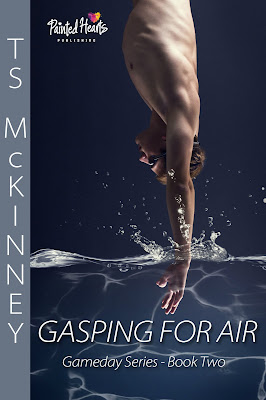 About Gasping for Air
How far will Trystan go to win the heart of the man he loves? All the way.

Trystan Matherly is conceited, arrogant, and rich. He has plenty of money, athletic ability, and gorgeous looks to keep the men forming a long line just to be with him. Choosing his next lover has been as simple as down-selecting to the hottest candidate.

With his sad eyes, full lips, and perfectly sculpted swimmer’s body, Dakota is just the kind of lover Trystan wants. After only one look, he knows he has to have him. Too bad Dakota seems to be totally oblivious to all his charms.

Dakota Jacobson is lonely, tired, and depressed. He’s at Alabama Temple to complete his degree, not to put up with idiots. He works diligently to be as invisible as possible. He doesn’t need friends and he sure doesn’t need lovers…especially not football titans that think they rule the world. Nope; been there, done that.

With his sexy eyes, arrogant smirk, and muscled physique, Trystan is just the kind of lover Dakota never intends to have…again. Too bad Trystan refuses to allow him to be invisible. Read my three-starred review for Gasping for Air.

Add Gasping for Air on Goodreads.

About T.S. McKinney
T.S. McKinney lives in East Tennessee with her high school sweetheart/husband and all the countless dogs she picks up from deserted country roads. Her professional career has been in business but her heart has always belonged to the fantasy world found in books.

Creating wicked worlds where one can meet the perfect hero – and then do anything to him that you want – has been a hobby that has brought her plenty of hours of fun and naughty entertainment.

When not working, reading, or writing, she loves to spend time with my family and forcing them (because they don’t really have another choice) to allow me to redecorate their houses…and listen to my naughty…sometimes sadistic stories. 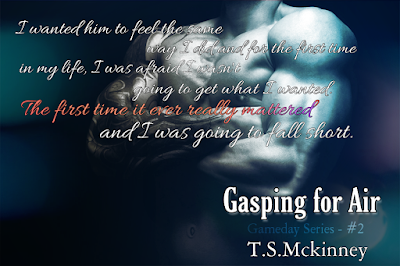