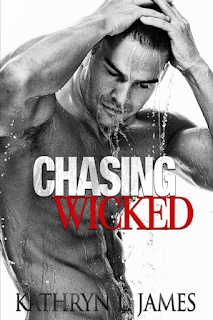 Ah, I do love it when a new-to-me author impresses me and that's exactly what Kathryn L. James did with Chasing Wicked, the first in her new Mitchell Brothers series about three brothers, Garrett, Chad, and Stone Mitchell. James starts things off with the youngest among the brothers, Stone, giving readers a second-chance romance that Stone shares with Avery Anderson, the only girl he's ever loved--a girl he--and she and the rest of their hometown of West Tempie, Texas--believes he betrayed six years ago. Everything around them--their hearts, their dreams, their respective families--broke apart. When they're unexpectedly thrown together, conflicting emotions come to the forefront. Along with that, one particular truth shocks both Avery and Stone, a truth that breaks down certain walls while fortifying others. The world as they know it changes, but they're now stuck in limbo. No one's ever come close to replacing Stone in Avery's heart, but the man before her now is far harder and colder than the boy she knew. With pasts they can't quite leave behind and a doubtful future, will these two live for an unknown present?

The story carries with a familiar plot line and voracious readers of second chance romances will easily figure out what Avery's secret is. While there is an air of familiarity, the author does a great job throwing in her own bits and pieces of originality and by the end of it all, the book truly feels like hers and stands on its own without having to compare it to any others out there. When I first learned what it was that caused their breakup, I confess that I had to pause for several minutes, contemplating if I needed to take a longer break and just pick up the book again later on. I chose to continue, and I'm glad I did because that particular tidbit was resolved quickly enough (thank goodness!). If Avery had her secret, so did Stone, and that was one I didn't see coming. I do think, though, that his reasoning behind his refusal to pursue anything commitment-related felt flimsy, since it was their breakup that caused everything around him to fall apart. You'd think that when that was cleared up and even after he confessed what his secret was to Avery, they'd have been good, but oh well. Still, I enjoyed Chasing Wicked and give 4.5 stars. ♥