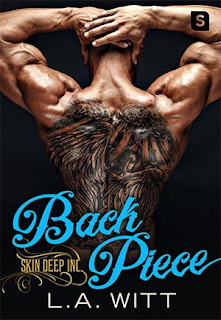 One of my favorite M/M authors has released the first in her new contemporary romance series, Skin Deep Inc., and L.A. Witt delivered with Back Piece. Set in the state of Virginia, this was a story between a thirty-one-year-old tattoo artist and owner of Skin Deep Inc. named Colin Spencer and a twenty-six-year-old member of the Navy named Daniel Moore. When they meet in a local gym, the not-so-secret glances have the two wondering if the other is actually receptive to more. Colin may be experienced when it comes to sex, but not all of those experiences were all that great, and he's got a couple of secrets that may very well scare away the shy and unassuming Navy man. On the other hand, Daniel has very little to no experience. Yes, he's a virgin and his coming from a highly conservative, homophobic family have him staying firmly in the closet as far as they're concerned. These two open up to one another in ways they've never done with anyone else, and soon, what was supposed to be casual becomes more. But when push comes to shove, can either man stay and fight for the still very new love?

There were many things that I quite liked about L.A. Witt's series starter. The story was one that had two men learning to trust each other and in turn, they find both love and acceptance. Colin and Daniel had their sweet moments, but the far steamier ones were among the hottest I've read so far in any M/M novel this year. There were several supporting characters who were memorable enough for me to wonder if they'd be having their own stories as the series progresses, but this was, for all intents and purposes, truly focused on Colin and Daniel. There was a lot going on with Colin, whose issues are so deeply ingrained in his psyche that he's more than aware they're already a part of who he is. Daniel reminded me of a puppy in the beginning, but he came into his own as the story developed, and even though there was a point where I wanted to smack him upside the head, he redeemed himself quite nicely. Overall, I wouldn't consider this the author's best work, but as a book on its own merits, I did enjoy both the story and the characters, and wouldn't say "no" to continuing the series. Four stars for Back Piece. ♥