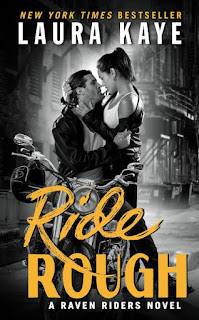 There are many MC romances out there, but if there's one that's had my attention from the very beginning, one that continues to impress, and one that I wouldn't even think twice about recommending, it's Laura Kaye's Raven Riders series. I'm not sure if this will have as many books as my other all-time Kaye favorite, the Hard Ink series, but with every intriguing member of the Ravens motorcycle club that's introduced and that I come across again in this spin-off, the more I hope that they'll end up having their own novel down the line. Wishful thinking? Maybe, but that's what happens when an author as talented as Laura Kaye comes up with a series that's worth reading every single time she releases a new addition to it. With the second full-length novel--but third overall release--entitled Ride Rough, Kaye gives readers a second-chance love story that has sex and romance paired with angst and action.

Thirty-four-year-old Maverick Rylan has only ever loved one woman--thirty-year-old Alexa Harmon. Best friends with Alexa's older brother Tyler, Maverick and Alexa were in love for so long and she was supportive when her boyfriend sponsored her brother becoming a prospect for the Ravens. But one accident led to one life lost and two hearts broken. Five years later, Alexa is engaged to a man as opposite from Maverick as you could get. Her life seems to be picture-perfect. But now cracks are beginning to appear, and Alexa can't help but wonder if the life she once had was what she was always meant to have, if only she hadn't turned her back on it. She may have ended things with Maverick five years ago, but he's still there, watching over her, making sure that she truly is happy and protected. Alexa realizes that Maverick will be there to rescue her, but maybe it's time she save herself.

Oh, Maverick, my Maverick. Okay, not mine, but had it taken Alexa another five years for her to realize that she already had the guy she was meant to be with but let him go, I would have snatched him from her. Not that he'd allow it. No, dear, sweet, super protective Maverick's heart only belonged to her, and I do love it when these gruff and rough members of the brotherhood that is the Ravens MC fall for a girl because they fall hard and they're all in. In the case of Mav and Al, this was their second shot at being together, but aside from the highlight being their revived romance, I love how each book never forgets to show readers the series arc of family and that's exactly what the Ravens have created as a club. The villain is known from the beginning but I so wanted to see how he'd be made to pay for his sins, and I can honestly say, this had a VERY satisfactory ending. Five stars go to Ride Rough. ♥