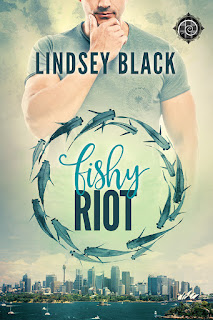 Fishy Riot isn't at all fishy but it is a riot--though the "riot" in the title has more to do with the riot police, of which main character Taylor Jameson and his twin brother Clay are part of, and the "fishy" part meaning "suspicious". First-time author Lindsey Black adds in her unique sense of humor--at times, in your face, other times, more subtle and witty--with action and suspense and comes up with a wholly creative and entertaining debut novel. The story is about a riot squad police officer named Taylor Jameson who isn't exactly known for his gregarious and laidback nature. He does his job and does it with a sense of purpose, but it never gets personal for him...until he meets Sietta Salisbury, the son of a well-known politician and a musical prodigy of sorts. Oh, and most of Australia had presumed he was dead. When Taylor is handed a mysterious USB, its contents have his protective side going into high gear. He wants to make sure that Sietta--along with Sietta's younger brother, Micah--are safe, but there are other feelings at play, too--feelings that may have Taylor crossing lines and risking his life and career...and his heart.

Can I just say that this novel had one of the most offbeat cast of characters I've ever come across, and most of them happened to belong to the same family? The Jamesons had me grinning and giggling with their purposeful antics, but it was the stuff that was more innate about them that made them so damn memorable. They were a nurturing bunch, very caring and loving, but not the kind that made you want to gag from too much sweetness. No, they were in a class all their own, and to brothers Sietta and Micah, it was almost like culture shock. But it was fun to see how they were assimilated into the raucous but fun-filled family and how they realized that family was about being loved and accepted without any set limitations or expectations. Any lulls in the story are few and far between and they certainly don't last long, making me think of them more as necessary breaks from everything that was happening with Taylor, Sietta, and the rest of the characters in this quirky but enthralling story. This may have been Lindsey Black's first published book, but it sure doesn't feel that way. Five out of five stars for Fishy Riot. ♥