Review: Mixed Up by Emma Hart 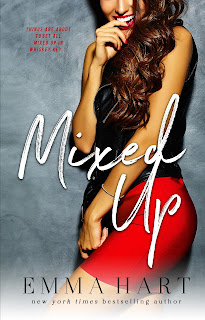 Mixed Up is the latest romantic comedy standalone from bestselling author Emma Hart and employs one of my all-time favorite tropes, enemies to lovers, and comes up with rather stellar results! Twenty-six-year-old Raven Archer mixologist who owns her own bar and restaurant. While she has no qualms handling anything and everything to do with the bar, she isn't exactly a chef and that's what her restaurant needs ASAP. The one person she wants--her older brother, Ryan--is a trained chef but he's already got a gig he's said yes to. Every applicant who's come in doesn't reach her standards. With her grandmother and other relatives from Greece coming in for a family reunion, Raven is pressed for time and is left with no other choice but to ask the one person she doesn't want--her brother's best friend, Parker Hamilton. So what if the twenty-eight-year-old is a three-star Michelin chef? He's a pain and lives to make her life torturous. She hates him and the feeling is mutual. But once Parker agrees to work for and with her, sparks fly, and they aren't the ones that happen when they squabble. Now, Raven is all mixed up.

I adore Emma Hart's rom-coms, especially since they tend to leave me with a satisfied smile on my face. Mixed Up was a fun read, one that had enemies becoming lovers and the whole falling-for-my-sibling's-best-friend story line down pat. The verbal back and forth between Raven and Parker was often hilarious and it made it pretty clear that there was no love lost between these two. The sexual tension once they were in each other's presence all the time was palpable, and when Parker and Raven got naughty, the reading got reeeaaalllllly nice. Aside from these two, of course, there was a plethora of side characters that you couldn't brush aside. Raven's family was very in-your-face and it was obvious where she got her personality from. On the other hand, Parker was far more quiet and laid-back, and his friendship with Ryan wasn't shallow, with the two being as close as brothers. Speaking of Ryan, I applaud the author for not going the usual route when the truth about Raven and Parker's relationship came out, allowing this book to stand out from so many others. Mixed Up was fun and flirty and one I'm handing 4.5 stars to. ♥