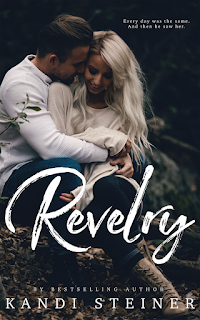 Revelry is the third Kandi Steiner-penned standalone novel that I've read and I'm impressed yet again at the level of emotion that this author is able to put on paper and manages to evoke in her readers. This was a second-chance contemporary romance but when I say "second chance", I don't mean the main characters were former lovers who get a second chance at working their relationship out. Here, fashion designer and boutique owner Wren Ballard and mechanic and handyman Anderson Black have lost two of the most important people in their lives and are still trying to come to grips with the loss and the notion of moving forward, even if it will mean paving a new direction.

Wren is a recent divorcee and was in a relationship with her now ex-husband for a decade, seven years of which were spent married. On the other hand, Anderson lost his cousin Danielle, who also happened to be his best friend and the person closest to him, in an accident nearly seven years ago--an accident that he feels wholly responsible for. When Wren rents a cabin in the town of Gold Bar, she doesn't expect to have her life changed by its residents, especially the grumpy guy who lives four cabins away, but fate manages to surprise both of them. Will Wren and Anderson be able to finally heal themselves--and each other--and maybe find the true meaning of home and love?

Can I just say that stories that have the characters taking their time to form some sort of foundation for a relationship--whether it be romantic or otherwise--tend to float my boat more than those that have characters drooling over one another from the get-go and then jumping into bed in the next chapter? I loved how Kandi Steiner made it clear that Wren and Anderson had issues that they needed to work through as individuals. Neither one was looking for a fling, what more a commitment. While not necessarily a slow burn romance, their love story was paced well, never feeling as if there was too much idle time or as if we were being rushed through the ending.

Aside from Anderson and Wren, this story also comes with a highly commendable bunch of supporting characters, a couple of whom I wasn't a huge fan of until they redeemed themselves--or well, the author redeemed them--by the end of the book. While the younger characters were entertaining, it was the older ones who reminded readers that with age comes wisdom (or at least that's the general hope!). Speaking of which, can I just say that the surprise twist at the end regarding one of the supporting characters brought a tear to my eye and a happy clench to my heart? I'm three books in and Kandi Steiner seemingly can do no wrong. Revelry garners five out of five stars. ♥