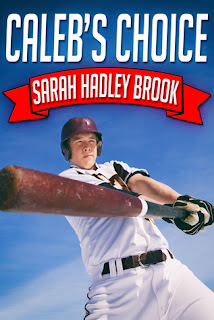 Caleb's Choice is the newest novella from Sarah Hadley Brook, and it's my second read from her, the first one being The Great Pretender last year. This time around, she gives readers a sports romance set in the world of minor league baseball. Twenty-four-year-old Caleb Dodson has always loved baseball, and while he enjoys playing for the minor league team of the Rain Valley Rabbits, his dream continues to be to make it to the majors. He also happens to be gay, but his sexuality isn't something that's up for public consumption, choosing to remain in the closet for the time being. The Rabbits's new announcer, though, may have Caleb reconsidering his options for the first time.

Twenty-five-year-old Lucas Landry is excited to be an on-air talent for Rain Valley's radio station. But when he's asked to temporarily take over as the announcer for the town's baseball team, Lucas is at a loss. He knows nothing about baseball and hates sports in general. His feelings towards jocks was something ingrained in him after years of bullying, but when Caleb offers to tutor him on the sport so that he doesn't sound so clueless, Lucas isn't sure how long he can hold off on his attraction for the player. But Lucas is out and refuses to be anyone's secret. Will he choose to shut down anything between him and Caleb, even if it may be the start of something special and more?

I really liked this quickie read from the author. She does a great job making the connection between Caleb and Lucas believable. I thought the story was going to go one way, so kudos to Brook for taking it in a direction that caught me off-guard but one that I appreciated. Caleb and Lucas are backed up by a good supporting cast of characters who help made the story more interesting without having to over-complicate what was happening between the two men. This is the kind of story that you can easily read in less than an hour's time and still be left satisfied, so if you're looking to squeeze in some reading this weekend, give Caleb's Choice a shot. It gets 4.5 stars. ♥