Review: How We Fall by Melissa Toppen 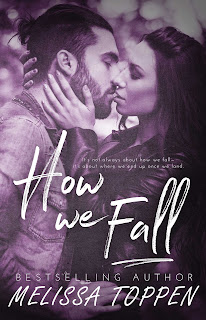 How We Fall is a standalone contemporary romance from bestselling author Melissa Toppen, with some parts told through flashbacks. It's a bit of second-chance story, though I qualify that by saying that the main characters were never in any sort of romantic relationship and that their friendship deteriorated during the high school years due to the hero's relationship with a mutual friend. So, when I say "second chance", it has more to do with Cole Lincoln and Melanie Anderson rebuilding the strong friendship they once shared and realizing that they were meant to be.

At ten, Melanie Anderson found herself a new best friend in the form of her new neighbor, fellow ten-year-old Cole Lincoln. Over the years, they grew closer, as did Melanie's feelings for Cole. But then he broke her heart more than once and when he left for college without a word of goodbye, he took her heart with him. Six years later, it takes the death of someone they loved dearly for their paths to cross once again. Cole may have left their hometown years ago, but the memory of Melanie has stayed with him. Now if only he convince her to given him a real chance.

This is my fourth Melissa Toppen-penned read and it's definitely my favorite. This could have turned out to have overly drawn-out complications you could see a mile away, but nope! It's pretty fast-paced and while the complications I expected were exactly what Cole and Mel had to face, they played out in a way that managed to surprise me, and that's saying a lot, what in this world of countless romances that share tropes and story lines. It was an emotional (though not so angsty) story but it had enough light moments to not make it too heavy of a read.

I really liked the cast of characters, though I did find it strange that Melanie and Dawn seemed to be more okay than Melanie and Cole were when they all reunited, considering Dawn was kinda-sorta-maybe bitchy with the whole Cole thing when they were younger. Other than that, I did think this was a good combination of characters who helped to move the story forward. This was a good love story and one that I think a lot of romance readers will appreciate as well, especially if you are looking for something to read this weekend. 4.5 stars for How We Fall. ♥