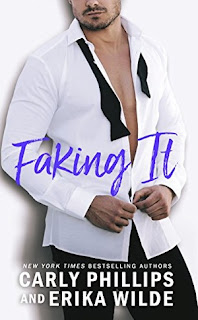 Faking It is the second book in the Book Boyfriend series co-written by Carly Phillips and Erika Wilde and features thirty-year-old realtor Maximilian Sterling and twenty-six-year-old matchmaker Hailey Ellison. Max has had a thing for Hailey ever since she first came in to Premier Realty looking for a building to house both her matchmaking business and a place of residence three months ago. The one thing that was stopping him from pursuing her was the fact that she was engaged, as made more than obvious by the ring on her finger. But when Max learns the truth about Hailey pretending to be engaged for business purposes, Max decides to make the situation beneficial for both of them. They'll fake being an engaged couple--Haley for her matchmaking reputation and Max to get an overly persistent woman of his back--but what happens when what was supposed to be fake begins to feel so real?

This second in a series has a very familiar story line to it and like all stories that begin with a fake relationship, very real feelings end up complicating matters, and that's exactly how things go between Max and Hailey. There's genuine attraction between the two of them, so why they needed to enter into a fake engagement is a tad mind-boggling. Wouldn't it have been more believable had they just started off naturally, as in dating? But of course, that's not how this story goes, and while the engagement may be fake, the sex clearly wasn't. I liked how light things were with Max and Hailey and how there were almost no complications other than the presence of Addison Brooks. I wish Hailey had defended herself more because no one should be allowed to bully another person the way Addison did. Overall, Faking It was a pretty good story with an easily predictable ending and this gets 3.5 stars. ♥

Read my reviews for the Book Boyfriend series: