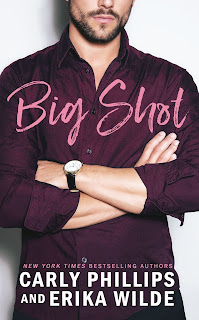 Big Shot is the first book in the new Carly Phillips and Erika Wilde contemporary romance about a group of four best friends who co-own Premier Realty, Book Boyfriend. For those who have read the writing duo's previous series, Dirty Sexy, you should be familiar with Wes Sinclair, who was introduced in the fourth and final book, Dirty Sexy Sinner. In this series starter, we've got ourselves a falling-for-a-best-friend's-sibling story with Wes and Natalie Prescott, younger sister to Connor, one of Wes's closest friend and one of his three partners at the real estate agency they own. After refusing to have Natalie become a broker with the agency, Wes now finds himself having one property after another swiped from under him by the eager young realtor. When they shake on a bet on who can get one particular property sold first, Mr. Big Shot expects to win, but could he lose his heart to his little Minx?

Okay, I freely admit that I wasn't much of a fan of Wes's for the first few chapters in the book. He was arrogant and not only underestimated Natalie, but belittled her by implying that her current success was due to nothing more than luck. But hey, I get it. The man clearly didn't want to admit the girl he didn't want as a broker in the business he co-owned with her brother was besting him at the very thing he was considered one of the best at. I liked how Natalie stood up for herself and refused to simply bow down to whatever Wes had in mind for her. She was confident and self-assured and she was definitely what made me love this book. As far as supporting characters are concerned, Richard Weller--Natalie's friend and fellow realtor--was the most memorable one and I kinda hope this isn't the last we see of him. Big Shot was a strong and enjoyable beginning to the Book Boyfriend series. Four stars. ♥