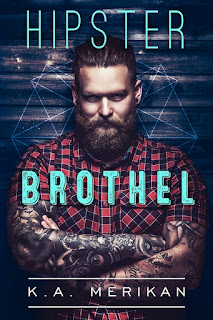 Jo Lau and Mr. B (also known as Bernard, but don't even think about calling him that in public) have been best friends for the past four years. When Mr. B's most recent relationship with his boyfriend--aptly called Mr. A--ends and he goes on to quit working for his now ex, it's Jo he turns to for a sympathetic ear. With suggestions of starting his own business lead Mr. B to consider opening his very own "hipster brothel", Jo isn't sure if it's a good idea. There's no denying that his best friend is one sexy beast--the personification of lumbersexual hotness--and he'd probably make quite a name for himself as an escort offering a lumbersexual experience to interested men. But Jo's been keeping a couple of secrets from Mr. B: not only is Jo bi-curious but he's had a major crush on his best friend from the get-go of their friendship. Even if he can convince Mr. B not to push through with the hipster brothel, will Jo be able to convince himself to take a risk and be with Mr. B the way he's always fantasized or not?

Hipsters and lumbersexuals and bi-curious secrets being kept from best friends, oh my! Hipster Brothel is very different from the past K.A. Merikan reads I've encountered. I actually loved that it was much shorter than the author's usual prose and there was a lighter feel to this one, with its story of best friends becoming lovers and accepting one's sexuality. Jo and Mr. B have such an easygoing friendship and how it went about it's transformation into more was actually a surprise as far as I was concerned, and I mean that in a good way. I kinda wanted to smack Mr. A--Hey, Arnold!--for being a jerk, but I did soften a bit towards him when he clarified a few things for Mr. B later in the story. Jo's ex, Juniper, was a breath of fresh air and it was interesting to see how the exes actually played a role in make either man come to certain realizations. This was an easy and fun read. It's a story about friendship, love, and discovering everything you may have been missing in between. Hipster Brothel gets 4.5 out of five stars. ♥