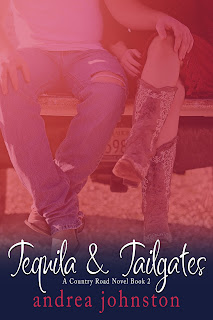 Squeeeee! I haven't squeed in a while, but this second chance, friends-to-enemies-to-lovers romance had me doing exactly that. I liked Whiskey & Honey, the Country Road series starter, but it's this follow-up, Tequila & Tailgates, that I loved. Andrea Johnston has clearly improved as a writer and storyteller, and I'm thrilled to see just how much she's grown and progressed in between the two releases. Jameson Strauss and Ashton Sullivan's love story may share a similarity or two with that of Bentley Sullivan and Piper Lawrence's--Ben being Ashton's older brother and Jameson's best friend and Piper being Ashton's best friend--but it had quite a different feel and tone.

Four years ago, Jameson Strauss and Ashton Sullivan shared one night together. Since then, they've never spoken about it, and the close friendship they once shared devolved into a tense relationship of sorts that was mostly snarky and testy back and forths. When a tree crashes through the Sullivan homestead, Jameson offers Ashton a place to stay while repairs are made. Being in such close quarters and in constant contact with one another may have seemed like a bad idea to Ashton and their families and friends, but Jameson was determined to get their friendship back on track. With so much still unsaid, can these two truly be friends or were they meant for more?

Hooray for this story being paced as well as it was. No fast-forwarding and if anything may have seemed like it was skipped over, Jameson and Ashton were forced to confront it later down the line. There's humor and there's angst, but neither one of them feels out of place in this story, both coming in at separate yet appropriate points in the book. There are tell-tale signs of just how great a friendship these two once shared when they allowed themselves to be comfortable in each other's presence, and those made for some of my favorite parts of their tale. My heart broke for them as individuals but it also hoped that they would ultimately find their way as a meant-to-be couple.

Aside from twenty-nine-year-old J and twenty-five-year-old Ash's story, it was fun getting to see how Ben and Piper's engagement was faring and what roles they would play in their respective best friend's romance. Owen Butler and Landon Montgomery--also best friends with Jameson and Ben--are back as well, and it looks like Owen's found himself someone who isn't going to easily swoon over his good looks and charm in Minnie Walker, so I'm looking forward to seeing how that plays out, plus I'm curious if anything will come of Landon's crush on the new bartender. Clearly, I'm going to need more Country Road in my life, thanks to the five-starred Tequila & Tailgates. ♥