Review: Girl Breaker by Harper Kincaid (Break on Through #3) 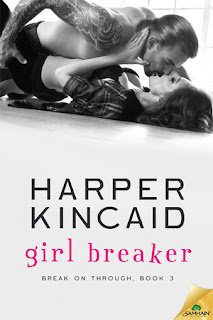 Note: This ARC was provided by Samhain Publishing via RockStar Lit PR in exchange for an honest review.

Girl Breaker is book three in the Break on Through series written by Harper Kincaid and is the story of Jessica Lockhart and Max Reinquist, both of whom were briefly mentioned in the first book and then going on to play more prominent supporting roles in the second one. Jessica is an elementary school teacher who believes in "the one", happily-ever-afters, and romance. Max...not so much. He makes it a point to inform Jessica that he likes his sex dirty and kinky and that the last thing he would want to do was sully someone as clean and vanilla as Jess. But even if they wanted to keep their distance from one another, Piper, Max's young daughter, connects them, and soon, both Jess and Max find themselves giving in to temptation. But there's a darker side to Max, one that he fears will harm Jess and Piper. How can he merge his two separate lives and will Jessica still want to be a part of it?

Max is an alpha male through and through and his biker lifestyle has him entering dangerous territory on a regular basis. We don't really get a deeper and more thorough look at what it is he's exactly got going on, so we're left guessing. He may be something of a manwhore--correction, a whore, since Max believes that's a gender neutral term--but it's Jessica that he really wants but never allowed himself to believe he could have. They were fun to read about together, but I confess that it was Max's interactions with Piper that I loved the most. It was clear that while he may have had a variety of women in his bed prior to Jessica and that he was a bad-ass biker who was doing, well, stuff, he was a father who truly adored the daughter he didn't know about until a few years ago. This was an okay read, one that I wish had delved more into Max's other life. Girl Breaker garners three out of five stars. ♥