Review: Life of the Party by Kris Fletcher (Calypso Falls #1) 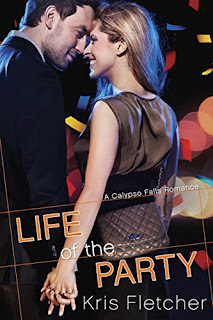 Life of the Party is the first full-length novel in the Calypso Falls series from author Kris Fletcher and follows the prequel novella, The Bridesmaid and the Bachelor. This series, set in the fictional town of Calypso Falls, New York, is about the five Elias sisters, and this first novel is about Jenna, who found herself minus a husband after a near fatal car accident left her less than perfect. She--along with her mother and sisters--were already abandoned by one man: her father. She's done having men leave her behind. This time around, she's getting ready to live a better life, scarred and all. She wants to get away from Calypso Falls and all the reminders of who she was--the daughter of a corrupt public official and the ex-wife of a man who cared only about himself and the bottom line. But then she meets Cole Dekker, an aspiring candidate for mayor of Calypso Falls. He's nothing like her ex-husband and he's nothing like her father, who himself was a former mayor. He makes her believe in promises and in hoping for something more. But will her past put an end to their promising present and leave them without hope of a future?

This was a pretty good story about a woman trying to make a name for herself, not wanting to be judged by the last name she had as a single woman and the last name she bore as a married one. I liked that Jenna was sassy and independent. She was also smart and loved her mother, aunt, and sisters without reservation. When Cole enters her life, she's understandably wary, but he's the first man since her accident and divorce that makes her want and makes her feel desired. There's a nice chemistry that goes on between the two of them, and for quite a lot of the book, it really is about how they are together. The moments Jenna has with her family--including her estranged father--give readers a clearer picture of how difficult it's been for her but how she's actually quite loved and how they want nothing more than for her to be happy. Cole was a dream candidate. He wanted to be a public servant, not a politician, and he made me wish there were more real people like him in this world of ours that's over-populated with self-serving politicians. Life of a Party was a four-starred read and I'll keep my eye out for book two. ♥

Purchase Life of the Party on Amazon | B&N | iBooks | Kobo.