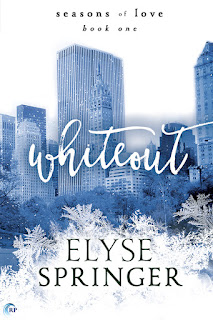 Whiteout is Elyse Springer's debut novel and it's the first book in her Seasons of Love series from Riptide Publishing. What was supposed to be a winter getaway between partners Noah Landers and Jason O'Reilly has led to twenty-nine-year-old Noah having an accident that's resulted in retrograde amnesia. He doesn't remember anything prior to his waking up, meaning he has no memories of the gorgeous forty-year-old man watching over him and never far from his side. It's clear that Jason cares for Noah, yet why does Noah feel as if there's something Jason is keeping from him? With a blizzard keeping them confined to the cabin in Colorado, Noah's memories are slowly creeping back in, but how can he distinguish what's real from what isn't, and when all his truths finally come out from hiding, will Noah and Jason be able to survive the fallout caused by months of secrets and lies then arise?

This review is going to be shorter than usual, mainly because I can't go into too much detail about the book. What I will say is that it's told in two parts: before he regained his memories and after he remembered everything he wishes he could simply forget. The flashbacks relay everything that went on between Noah and Jason during their six months together, and that's when it becomes clear that there's more than meets the eye. The twist in the story threw me for a loop because I never saw it coming, and me being the amateur conspiracy theorist that I am had a couple of theories going as to what may have been going on prior to the accident. Though the first part got off to a slow start, the second went at a fast clip, making for an acceptable pace overall. I'm giving Whiteout 4.5 stars and am looking forward to the next three books in the series, especially with this curious cast of supporting characters. ♥