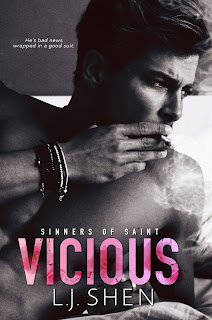 “I couldn't breathe without thinking about what a monster I was underneath my clothes, underneath my flesh. And then, there you were. Pure and scar-free, with your big kind eyes and honest smile. You were so clean, and I was filthy. I guess I wanted to dirty you up.”

Sometimes, a girl simply needs a guy that she loves to hate and that she hates to love. With the first full-length novel in L.J. Shen's new series, Sinners of Saint, readers get exactly that--an antihero who lives up to his name and has a tale to tell, one that he shares with the perfectly cast female who's more heroine than she is damsel in distress and set in Todos Santos, California. Baron Spencer, Jr. is, indeed, Vicious, and at seventeen and during his senior year in high school, his brand of viciousness is directed at one individual--an innocent girl--named Emilia LeBlanc. Millie to her friends and Help to Vicious, Emilia was the daughter of the new household staff brought in by Vicious's parents--his father and his stepmother--and their introduction to each other is less than pleasant, a beginning which paves the very rocky road that they find themselves on until he does the one thing that leads her to hating him. Ten years later, Emilia is grasping at straws to keep a roof over her head and that of her ailing younger sister. She's desperate enough to take any job, which is why she's prime pickings for Vicious. He has a plan, one that he's been ruminating on since he learned dark secrets a child shouldn't have been privy to, and the one person that could help him finally end everything once and for all is the same one he's always wanted but never had...until now. But will Em ever give Vic everything he demands, and if she does, what's at stake for Emilia?

Vicious was a savagely sexy and surprisingly sweet read, and it's absolutely put author L.J. Shen on my radar, making me anxious to read even more of this series and discover her past releases. There's no sugarcoating here, folks. Baron Spencer, Jr. isn't a nice guy. Not when he was a teenager and not when he was an adult. He doesn't pretend otherwise either. He owns up to his reputation because it's his reality. Emilia LeBlanc is certainly no stranger to Vicious and what he's capable of just to get what he wants and to have the world around him adjust to his whims. What he did to her when they were both eighteen was underhanded and manipulative, but he's able to justify it in his head. What Vic feels for Em he feels immensely, and all those conflicting emotions lead him to act and react rashly. Vic's back story is difficult to read, and my heart broke for him, even when his spirit didn't, making him into the hard person he became after his mother passed away. Em was the breath of fresh air that he needed and wanted, but did someone like him deserve someone like her? I can't find sufficient enough words to explain why and how much I loved this book. I went into this without having read Defy, the prequel novella which was part of an anthology and will be released separately next month, but it still worked out quite well in the end. Ask me what I want. I so want more of the Sinners of Saint because Vicious was a five-plus-starred, decadent series starter. ♥