Review: Tell Me a Fantasy by Tamara Lush (Story #6) 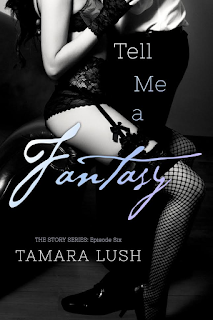 Tell Me a Fantasy is the sixth installment in the Story series penned by author Tamara Lush. If you're familiar with the first five episodes in the series, Colin King should be no stranger to you. He's Caleb and Emma King's brother and brother-in-law, respectively, and he played a significant role in the fourth episode--which I won't get into because you should just go ahead and read the first five episodes. I will say, though, that you can totally read Tell Me a Fantasy without reading Caleb and Emma's story (though seriously, read it), but yes, they do make an appearance in this new series addition. For all intents and purposes, however, this is wholly Colin's story, one that he shares with fellow Miami resident, acclaimed fashion designer, and flying non-enthusiast Samantha Citrouille.

Forty-five-year-old Samantha Citrouille has a very real fear of flying, but her presence is required at London Fashion Week, so she steps onto the plane hoping for the best but expecting the worst. The appearance of thirty-nine-year-old real estate mogul Colin King proves to be a bit of a distraction. He's arrogant and cocksure, but he's also someone who clearly cares about the stranger white-knuckling the arm rest between them. When the plane is forced to make an emergency landing in Reykjavik, Iceland, Sam and Colin share close quarters, and soon give in to the attraction that's been simmering between them from the start. But Sam knows rejection all too well. When Colin fails to show up when he says he will, could it spell the end of what was looking like a promising beginning?

When I learned that Colin was going to be getting his own story, I was happy because even if he is a cocky man, he deserved to have his own happily-ever-after, especially since his two siblings had already found their own. His love story with Sam--who he adorably nicknames "Pumpkin" because that's what her last name translates to--went in an unexpected direction and I was shocked there was no cliffhanger. The surprises were well appreciated because I do like it when I'm kept on my toes. There's really no doubting that the author is more than capable in writing a story worth reading, but she's also been able to make readers care about her characters, which is, at times, difficult to do. Tell Me a Fantasy was a relatively quick read, but one that I enjoyed immensely. I'm giving this one five stars. ♥

Read my reviews for the Story series:

Purchase Tell Me a Fantasy on Amazon | B&N | iBooks | Kobo.