Review: To Have It All by B.N. Toler 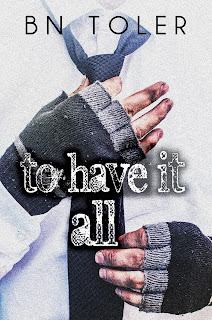 Liam is a man who's life is on a downturn, but he remains a good person, not allowing desperation to force him to do anything criminal. When he sees Max, he notes how the clearly wealthy and worldly man appears to have everything someone could ever desire. Max looks upon Liam with disdain and disgust while Liam looks up at Max with a bit of envy and wonder. When Max's life was endangered, Liam risked his own to save him, only to be abandoned by the very man he rescued, left dying on the street. But life has a strange way of working things out...

Liam is in a coma, lying in a hospital with doctors wondering if and when they should pull the plug. Except it's just his body that's there. You see, Liam woke up a few days after the accident...in Max's body. And Max? Well, he was stuck in Liam's body. Now able to see what life was like on the proverbial sunny side of the street, Liam comes to the realization that there were many shadows on said street. Complicating matters even more is his falling for Waverly, Max's ex-wife. Can he really have it all if he continues to live as someone else or will fate intervene again?

I'm not exactly sure who originally quipped the infamous line "Karma is a bitch," but I've said it more than once in my lifetime and I've seen it to be quite true. After having read my first ever B.N. Toler novel, however, I've begun to see Karma in a whole new light. She steps in to make sure that the tenuous balance between positive and negative consequences of our actions is maintained. In the case of To Have It All, Karma does what she believes is necessary for all the characters to see that life isn't about having it all but making the most of what you have and are given.

This book had a lot of feels. I mean, with a main character like Liam, you're kind of guaranteed that feels are going to come your way. I adored him and loved how he was with both Waverly and Prim. The story was such a breath of fresh air and with a number of other B.N. Toler books waiting on my e-reader, I'm inspired to get cracking on reading those as well. To Have It All reminds us that in life there are ups and downs, but it's also a matter of getting up after we've been down and that it's never too late to redeem ourselves. This wonderful read receives 4.5 stars. ♥