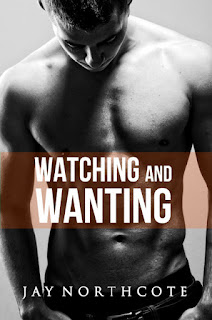 Watching and Wanting is the fourth and most recent addition to the new adult M/M romance series created by author Jay Northcote entitled Housemates. Those who have read the previous three books in the series should be familiar with Shawn, who is an original housemate from the beginning. With his closest friend and housemate having moved away, is now the only straight housemate left--I'm not entirely sure about their newest housemate Ben, but more on him later in my review. He's recently graduated from university and the future should be bright for a young man like him. However, his job isn't exactly one with much of a future for him professionally and now his personal life comes to a screeching halt when his girlfriends ends their relationship. Shawn's feeling rather rudderless, without much direction or and very little purpose in his life. But could he possibly find some sort of direction after he stumbles upon his housemate Jude's secret and could he allow this man to take control of him?

Jude is a student who's life is split between the two most important things in his life right now: earning his degree and earning a living. So what if he happens to be a cam boy performing for tips for the faceless, anonymous fans who pop in to watch him satisfy himself and sate the rest of his paying public each time? He isn't hurting anyone and the money isn't anything to scoff at. He isn't ashamed of what he's doing; he just doesn't think he needs to have his housemates privy to it. But then Shawn--his housemate and current crush--inadvertently learns all about Jude's cam boy secrets. Of all the scenarios in his head, the last thing he ever expected to happen was to have Shawn secretly watching him online and then offering to participate on camera. Maybe it's the idea of earning money, or maybe he's bi-curious, but whatever Shawn's reasons may be, Jude wants more than being just watched and wanted. Will Shawn ever be truly ready to be honest with himself--as well as everyone else--about who he is?

Like a Lover has been my favorite book in the Housemates prior to the release of the latest book, but now, Watching and Wanting has nudged it down to the second spot. To be perfectly honest, Shawn was the last guy in that house in Plymouth that I'd even think of being bisexual. Okay, maybe there's Mike, but he isn't around anymore and Shawn has always been quite heterosexual in the past three books. This isn't a gay-for-you story; this was about Shawn accepting who he's always been and learning to deal with what being bi meant. I think that Jude was the perfect counterpoint to him, someone who was absolutely comfortable with who he was and who it was he wanted. I appreciated the confusion and hesitation because it felt like both Jude and Shawn wanted to be sure about what was happening between them. Mac and Jez and Dev and Ewan are very much around, and we meet Ben, the new housemate, who I'm quite curious about, so I hope he's next. Watching and Wanting gets five stars. ♥

Read my reviews for the Housemates series:

Purchase Watching and Wanting on Amazon.