Book Spotlight: Life of the Party by Kris Fletcher 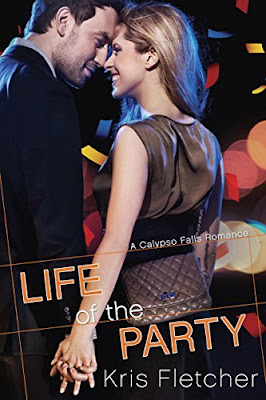 About Life of the Party
In this all-new contemporary romance series, the five Elias sisters of Calypso Falls, New York, discover that love sometimes arrives in surprising ways...

Jenna Elias was always the life of the party, coasting on her charm and beauty, hiding the shame of the scandal surrounding her absentee father, a corrupt politician. But the party ended all too soon with an injury that left her partially paralyzed and a husband who simply left her. Now, at age thirty, she’s back in Calypso Falls. She leads a simple existence working in her sister’s coffee shop, but Jenna misses the joy she once had in her life. Then Cole Dekker walks into the coffee shop.

As idealistic as he is sexy, the local lawyer is running for mayor of Calypso Falls. Drawn to Jenna’s quick wit and radiance, he asks her to volunteer for his campaign. As the two start working together, there’s no denying the powerful attraction they feel for each other. A desktop makeout session leads to much more. But when Jenna’s dad returns to Calypso Falls and wants to be a part of her life again, the association could spell political suicide for Cole—and the end of a once-in-a-lifetime chance at true love.

Read my four-starred review of Life of the Party.

Add Life of the Party on Goodreads.

An Excerpt from Life of the Party
Jenna couldn’t quite stop staring at him.

Her rational brain ticked through the points—attractive guy, my age, waiting politely—while something within her urged her to look harder. Deeper. Before she missed something vital.
Then he raised his eyebrows and tipped his head, and she caught it. The flash of humor. The air of expectancy. The feeling that, in this moment, she was the only thing that mattered to him.

“Could I get a coffee, please?”

Okay. So his desperate focus had been not on her, but the caffeine she represented. Nothing wrong with that. Better, even, than the possibilities being offered up by her imagination.

She returned to the register and focused on the order she needed to modify. It would be a lot easier if she wasn’t certain that he was following her every move, watching her hands glide across the keyboard like they held Harry Potter’s wand. Or maybe he was the one with the magic. It certainly took all of her resolve to stay on task when she had this sense that she was being compelled to turn back to him.

Lucky for her, learning to walk again had taught her a few things about determination.

At last the receipt was modified. She braced herself and returned to Mr. Compelling with the practiced smile she kept in her pocket for any situation requiring tact and/or faking.

“Sorry for the delay. One coffee, right?”

“Let me deliver these and I’ll get right on that.”

She reached for the tray, but he placed a hand across it.

Well, hell. There was nothing like watching a guy turn into an entitled, demanding jerk to crash through the Hormone Net.

“I’ll be right back.” She said it firmly, resisting the urge to explain playground rules about taking turns to him.

“That’s going to the table in the corner, right? The loud group?” At her nod, he added, “I’m with them. Add my coffee to the bill, let me pay up, and I’ll do the delivery myself.”

Her first thought was that Aunt Margie had got things seriously wrong when she said that all men were shortsighted asses who couldn’t see beyond the ends of their peckers.

Her second was that he’d caught her limping and felt sorry for her.

She straightened her shoulders, her backbone, her hips. “Thanks, but I can manage.”

“Sure you can. But I’m heading that way anyway.”

“That’s very kind of you, but I’ve kept them waiting long enough.”

“Yeah, well, I kept them waiting longer. If I come bearing gifts, they might be more forgiving.” The grin flashed again. “In fact, why don’t you toss a few of those muffins on the tray, too. I have a lot of groveling ahead. It might go better if I feed the beasts before I throw myself on their mercy.”

How was a girl supposed to resist that?

Kris Fletcher writes about small towns, big families, and the love that grows despite them. She has a thing for underdogs, which probably explains her lifelong devotion to the Toronto Maple Leafs. Kris shares her central New York home–fondly known as Casa Kitty–with her husband, kids, two cats, and a large population of wild killer dust bunnies. You can learn more about Kris, her books, and the view from her balcony at www.krisfletcher.com.