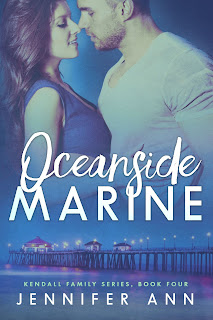 Oceanside Marine is the fourth novel in the Kendall Family series and my first ever Jennifer Ann read. I usually make it a point to read books in a series in order, but try as I might, time wasn't on my side, what with everything going on offline and online right now. I kinda regret not having read the other books because even though each one is touted as a standalone, the characters recur, as is often the case when a series is about one specific family and how each unmarried member finds love and their happy ending. The story itself was pretty good, especially because having the female main character as the older one was what made me want to read this. As far as the likability of the characters is concerned, I liked one and the other...well...not so much, which did affect my feelings.

Twenty-four-year-old former Marine Braden Kendall has had a thing for single mother Katie Walker since he met her four years ago. Sure, they've got a ten-year age difference and he's closer in age to her two teenage sons. And yes, she's his sister's sister-in-law. So what? He knows what he wants and it's her. When a trip to Vegas finally allows him to be in closer proximity to her, he presses his advantage. Is Katie attracted to Braden as well? Very much so, but she can't quite forget their age difference nor the fact that she's wary about becoming too involved with anyone, not after having her first child at fifteen and the next one two years later. She tries to keep Braden at arm's length, but Braden isn't taking no for an answer. Can these two get over all their issues to find love together?

Okay, I liked Braden. Yes, there were moments that his immaturity was on full display, but the guy had a good heart and his intentions with regards to Katie were far from nefarious. I liked how he was with his own family as well as Katie's two boys. He didn't see the difference in age as a hindrance, but Katie did. Again. And again. I get it already. She's older than he is. Of course I expect that difference to be pointed out every once in a while, but it got so tiresome. For as compatible as these two were, I found myself wishing Braden would just fall in love with someone else so that he could have the happy ending his other married siblings had. May-December love affairs are often interesting, but when the story becomes only about that, it falters. Overall, Oceanside Marine was a 3.5-star read. ♥