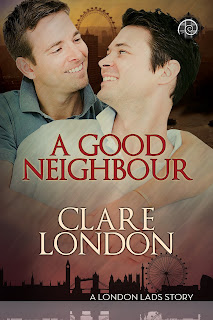 I just found my favorite London Lads book so far! Clare London gives fans and readers a story set in Petersham, a village outside of London, and two men who have been carrying on a very clandestine but very passionate affair. Dylan Philips likes his life as a science teacher at a local college and staying in his house in Petersham. He makes time to visit with his great-aunts, Bess and Mitzi, but when they decide to press him into asking Josie Whitman out, Dylan balks. He likes his neighbor just fine, but it's not Josie that he wants--it's Josie's brother, Neal. Actually, Dylan and Neal have been together, having both been attracted to one another from the moment they met. With Neal usually traveling due to his job as a journalist, they're only able to make time to be together when Neal returns to the house he shares with Josie. But with Dylan still keeping his sexuality a secret, no one knows they're a couple. When Neal is offered an opportunity to become a television presenter, Dylan realizes it may spell the end of their relationship. Can Neal convince Dylan to move from Petersham or can Dylan convince Neal to stay and just be his?

Gah! Dylan and Neal were adorable! I loved these two men together. They were sweet and sexy and seemed to be absolutely well suited as partners. They do have certain obstacles in the way of their happy ending though--Neal's job and Dylan's remaining in the proverbial closet. They're also opposites, with Neal embracing his adventurous spirit and being on the move and Dylan preferring the comforts of home and the roots that are firmly embedded in Petersham. But see, what they're "lacking" in their lives is what they discover in one another, which is why these two belonged by each other's side. Aside from these two men, Bess and Mitzi were such scene-stealers! Never underestimate your elders, fellow readers. Dylan's great-aunts may have been getting on in years, but they clearly loved their great-nephew and wanted him to have the kind of happiness and security that they felt he deserved. For such a quick read, there was absolutely nothing lacking about A Good Neighbour. It had a bit of angst, some humor, a love story that stood out, and main characters that I wanted to hug. This third novella receives five stars. ♥

Chase the Ace (novella one) - five stars - My Review

How the Other Half Lives (novella two) - five stars - My Review