Review: Gone for You by Riley Hart (Wild Side #1) 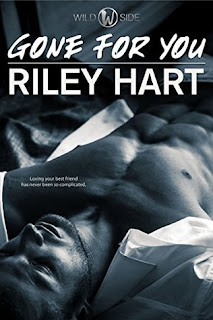 Gone for You is the first full-length novel and second release in the Wild Side series from author Riley Hart. It can be read as a standalone, although Austin Thompson and Dare Nichols--a counselor at an LGBT youth center and the owner of Wild Side, respectively--do appear here as well as the rest of the series. Wild Side is a bar where a set of close-knit friends--Oliver Hayes, Miles Sorenson, and Chance (whose last name I don't recall coming across but I'm guessing we'll get to that when his story is released as the third full-length book)--have been going to every Friday night since they were twenty-one. Now all twenty-eight, the three friends are like family, but there's a fourth member who hasn't been around all that much since he left California for New York ten years ago--Matthew Daniels. Matt left to pursue his dreams of writing and creating his own music but those dreams have morphed into something different. Now a successful model with a boyfriend, Matt feels as if something is missing. When he decides to return to California for a visit, it's his best friend Oliver he leans on. The same Ollie who's loved Matt since they were teenagers. For far too long, Ollie's held on to that love he has for Matt, but when he decides it's time for him to let go and move forward, Matt will have to make a choice to fight for Ollie and for his own dreams.

I swear, Matt had me all frustrated for a great majority of this book. And when I say "frustrated", that isn't really a good thing. The guy was selfish, and yes, I understand that he wanted to do things on his own, to prove that he didn't need to have Ollie ready to fix things for him whenever they may fall apart, but he went about it in such a self-serving manner, not even considering how his words and actions were going to affect his family and his friends, especially Ollie. Now, I'm not saying Ollie's all innocent in this either. Gah! He was a glutton for punishment, getting his heart bruised and abused each time Matt decided he was worthy of a phone call or a visit. Ollie made time for Matt, but it was rarely, if ever, the other way around. I was totally siding with Miles on this one, but the heart wants what it wants, even when your head tells you it isn't right. So yeah, I wasn't a huge fan of Matt's, but Riley Hart did a great job making sure he was worthy of Ollie's love and loyalty by the end of the book because that's how long it took for him to win me over. Aside from their love story, both Miles and Chance captured my attention as well, and I'm curious to see who these two are going to end up with considering how different they are. Overall, the story was great, Ollie was good, and Matt...got better. Four stars go to Gone for You. ♥

Purchase Gone for You on Amazon.