Review: From War to Forever by Andria Large 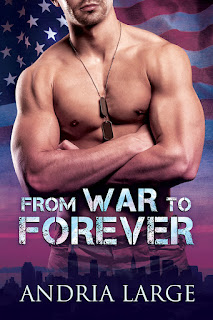 Originally released as a four-part self-published series entitled War, author Andria Large has consolidated those four books into From War to Forever, which is published by Dreamspinner Press. The book covers the friends-to-lovers story of two former Marines, Dennis Parrish and Tucker McCoy. Dennis is a widower who lost his wife four years ago after she was taken by terrorists in Iraq and then goes on to lose his men and part of his leg after their convoy was attacked two weeks later. Tucker lost his hearing and most of his team after an RPG attack in Iraq, and while he had the option to undergo surgery to regain his hearing, his deafness becomes a cross for him to bear, one he believes he deserves after his friend sacrificed his own life for him. When Dennis and Tucker meet, it's as roommates in a hospital. They go on to become roommates after they're discharged, and they become the greatest source of support and understanding for one another, knowing all too well the horror the other has experienced. But one night, their closeness crosses over into intimacy, and it irrevocably changes their lives forever.

This book was my first ever read from the author and I had been looking forward to it ever since I first came across the series on Goodreads. I'm a sucker for a good friends-to-lovers romance, and I was definitely intrigued with Dennis and Tucker's story. They were straight men before one kiss changed everything, but it was also clear that they were beginning to notice each other in ways they never had other men before. I confess that they're sleeping in each other's beds to provide comfort--not sexual, mind you--was a bit odd for me, but hey, I fully understand that there are times when just having a warm body next to you, someone you love, even in a platonic manner, and trust is more than enough to ground you when things feel out of your control. It could be a mere touch, a holding of hands, or a hug, and in the case of Dennis and Tucker, it was sleeping next to each other. There were times that these two were very affectionate, even when they were just friends, and it got me to thinking that two guys who happen to be friends and are affectionate shouldn't be treated different from two girls who are the very same way.

Because these are four books basically rolled into one, it makes for a lengthy read. Fortunately, I was engrossed the entire time. It's told from the perspectives of both Dennis and Tucker, plus, surprisingly enough, that of Duke Tavish, Tucker's closest friend and a former fellow Marine. Duke's story is told at length in the series, coming between the second and third books that were centered on Dennis and Tucker, but we get enough snippets here to know what goes on with him and his own back story as well. I wasn't sure I was all for his POV being included in the beginning, but as the book went on, I found it rather interesting to have someone else's viewpoint, especially when both Dennis and Tucker were being close-minded and not listening to reason. All three of these men suffer post-traumatic stress disorder, and both Dennis and Duke have been diagnosed with depression. The author's handling of these sensitive subjects was admirable and gave me a better appreciation for all their stories. Overall, I enjoyed From War to Forever and wouldn't say no to reading more from Andria Large. I'm giving this one 4.5 stars. ♥