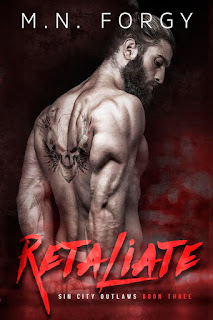 Retaliate is the third book in author M.N. Forgy's Sin City Outlaws series and it's one that I've been looking forward to reading ever since I fell in love with the first two books, Reign and Mercy, both of which were about the same couple, MC president Zeek Deluca and a deputy named Jillian Adams. My expectations were sky-high because that's what happens when a story about a known criminal--someone who doesn't really hide the fact that he's an outlaw--and a law enforcer fall in love with each other leaves you impressed. Here, we have Felix Deluca, vice-president of the Sin City Outlaws and Zeek's cousin, and Alessandra Lucas, a deputy and Jillian's best friend. These two didn't like each other or what the other represented. It was an enemies-to-lovers story. Does it sound familiar?

There's a deeper level of dislike that goes on between Felix and Alessandra compared to Zeek and Jillian and just like its predecessors, there's a twist in this story as well. The twist, though, was one that I had pretty much figured out even before it was revealed. It was different, yes, but I was hoping for something far more distinguishable between books one and two and this latest release. There's no denying that the sex scenes between Felix and Alessandra were hot and that there was chemistry between them, but I'm not entirely sure if these two were really capable of having a relationship that went beyond sex. I did like the tension between them because it was difficult to tell if one was going to smack the other and get violent or if they were going to simply start getting it on already.

The book starts strong and it more than piqued my curiosity, although it did remind of a particular series that I consider one of my all-time favorites. Then the prologue ended and so did that feeling of mystery. Me being the suspicious person that I am guessed how it was connected to the current couple and story, but I wanted more of it. It didn't even peter out, more of shocking us at the beginning and then disappearing completely until it popped back in midway. I'm not saying that Retaliate wasn't a good read. It was, but it reminded me too much of Zeek and Jillian's story, and compared to the first two books, it just doesn't measure up. Had I never read Reign and Mercy, this would probably get a higher rating, but I did read them, so I give this four stars. Fingers crossed for book four. ♥

Read my reviews for the Sin City Outlaws series: