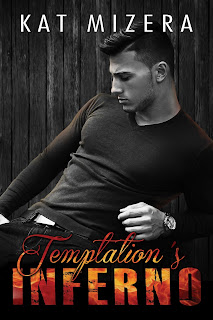 Temptation's Inferno is my first Kat Mizera read and it's the second novel in her Inferno series, which is a spin-off of her Las Vegas Sidewinders series. Now, I knew going in that this was part of an ongoing series, and I was a bit hesitant since I prefer reading books in a series in order and if it's a spin-off series, I prefer reading the original series first. But, I jumped in anyway because it was an M/M and because it was touted as a standalone. I guess it could pass as exactly that, however, there was a back story as to why hockey player Jamie Teller was being traded from his current team--the Sidewinders, who were the focus of the original series--to a team in Canada. Yes, bits of information are included here, but I personally felt that, had I read the novel before this one--Salvation's Inferno--then I would have maybe had a better understanding about why it got to the point of a baseball player playing God and insisting that the hockey player he and his then-girlfriend, now-wife had a threesome with would be the one to fall upon his proverbial sword. I wasn't a fan of said baseball player or his wife for more than half the book as well.

Then there were all these peripheral characters from the Sidewinders plus their better halves, so there were so many names and back stories to take note of. Plus the other main character, hockey player Viggo Sjoberg, was bisexual, married, and had a kid, but was also roommates with Jamie, and there was nothing really between them until one threesome changed everything. So, there was A LOT going on and it didn't help because Jamie's relationships with the characters who mattered--Viggo, Viggo's wife, the baseball player, and the baseball player's wife--seemed to be in flux. Sometimes, he would be okay, but other times, he wasn't. There was some resentment with regards to the baseball player, but then he would watch the man's baseball games and accept his help, so yeah, confusion galore. I know Temptation Inferno has received some high ratings on Goodreads, and maybe I'm just the odd duck here, but I honestly can't give this more than three stars. The writing was okay and there were some good moments between Viggo and Jamie, but there were just too many distractions for me to be all in here. ♥