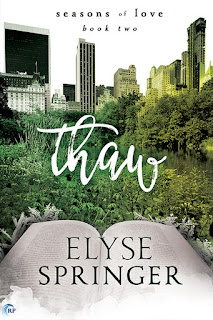 Thaw is an F/F romance and it's the second book in author Elyse Springer's Seasons of Love quartet. Abigail (who has no last name...argh!) was introduced in the series starter, Whiteout, and now she gets her own form of a happily-ever-after (okay, maybe more of a happy-for-now) in book two, which she shares with a French Canadian one-time stage actress turned successful fashion model named Gabrielle Levesque. When Abigail agrees to go as her friend's date to an important party, the introvert in her decides to focus on the fact that she'll be able to do one of her favorite things--people watch. When her attention is snagged by a gorgeous and statuesque woman who's been given the moniker of "Ice Queen", the last thing she expects is for Gabrielle to ask her to dance. But that one dance has them going on a date. And while Gabrielle clearly isn't forthcoming when it comes to talking about herself, Abigail's curiosity and attraction have her entranced. But with a controlling and jealous manager and Abigail's asexuality and problems with work, will Abby ever get her Ice Queen to thaw long enough to fall in love?

This was a curious read, what with one main character not interested in any form of sexual interaction other than the intimacy of kissing and cuddling and another main character who keeps everyone at a distance and not really interested in forming attachments with anyone. Abby and Brie as individuals seemed to have readable stories to tell, I just didn't feel like these two clicked as a couple. To be honest, I was a tad bored with their dates and had Brie treated me as shabbily as she did Abby, I wouldn't have bothered to give her the time of day. The cynical part of me had to wonder if Abby was constantly agreeing to forgive Brie and to dates with her because the woman was a model and Abby saw herself as nothing more than a boring librarian. Getting information out of Brie was like pulling teeth, and after a while, I just lost interest in her. Even Abby's friends seemed to be far more entertaining than she was, which is why I'm looking forward to reading book three, Heat Wave, which is also an F/F romance. Fingers crossed it'll hold my attention longer than Thaw did. All things considered, I'm going to give this three stars. ♥

Read my reviews for the Seasons of Love series: