Review: One Call Away by Felice Stevens 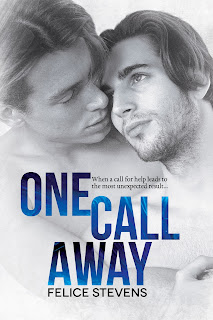 
One Call Away is a spin-off of the Through Hell & Back series, specifically the third book, Embrace the Fire, and it's author Felice Stevens latest release. Thirty-two-year-old Noah Strauss's career as a psychologist has been far more fulfilling than those years he spent as a successful model, though his mother may not agree nor fully understand. His radio show, One Call Away, is his gateway to helping those in the LGBT community who need someone to listen to them and maybe have someone offer them some sound advice. When Noah gets a call from an anonymous caller who says he's struggling with his being gay, Noah immediately feels for the young man. The call is abruptly cut, but it's mostly due to the caller's feelings of guilt. Why? Because twenty-eight-year-old lawyer Oren Leavitt was only calling as a dare from his overbearing, homophobic, racist boss. There's a lot riding on his career and he has no choice but to play ball if he hopes to be able to help his parents out with his mother's medical bills. But Oren isn't all too sure that what he said to Noah was a lie. He's felt different from other guys for so many years, but his orthodox parents may shun him if he confesses the truth that's still buried deep inside him. Noah has become Oren's sounding board, but will Noah--who values trust above all else--feel betrayed when he discovers the truth?

I enjoyed Noah and Oren's story and liked how their relationship had its ups and downs but highlighted the importance of trust and communication. This wasn't just a story about love and romance, but it was also about acceptance--whether it be of oneself or from someone else. It was also about family and how certain assumptions can be mad by family members but with some open and honest discourse, avenues of reconciliation or understanding can be laid down. I really liked Noah, especially considering what it took for him to move his life forward after he was viciously attacked by a rival fifteen years prior. That doesn't mean that he's perfect, however, what with his issues with his mother who thinks he's wasting his life away being a psychologist instead of making a return to the world of modeling. There were times that Oren was a bit wishy-washy, but I understand that coming out to his parents and being open about his sexuality at work were far easier said than done. Noah's older brother, Jeremy, caught my attention, and I wonder if the author will be sharing with readers his story somewhere down the line. Fingers crossed for that one! Overall, this is one of my favorite Felice Stevens reads. It wasn't overly sappy and it didn't over complicate an already complex situation for both men. One Call Away was a 4.5-starred winner! ♥

Purchase One Call Away on Amazon | B&N | iBooks | Kobo.