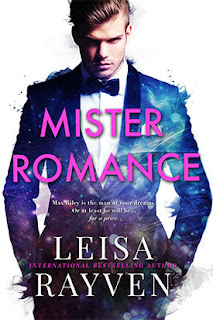 
“How do you not know by now that I love you more than I thought I could love anyone? It’s sad and pathetic and wrong how much I love you, and most days I’m so desperate to see you and touch you, I want to punch myself in the face.”

Whoa my God. I am so revoltingly in love with Leisa Rayven's writing! I've been a fan from the moment I met Cassie Taylor and Ethan Holt in her debut smash hit, Bad Romeo, which was the series starter of Starcrossed, back in 2014. With Mister Romance, she not only starts off her new series, Masters of Love, with a kiss and a bang, she's reiterated why so many fans and readers have added her to their list of go-to authors. Her latest fictional endeavor is every bit the romantic comedic masterpiece I was both expecting and hoping it would be, but she also managed to surpass those hopes and expectations by keeping it cliffhanger-free (yay!) and making me all giddy and swoony.

Eden Tate needs something more substantial to perk up her flagging career as an investigative journalist. When her sister mentions a man who fulfills his female clients' romantic fantasies, Eden scoffs that such a man exists, what more that he would make money off of such an absurd thing. But what is about this so-called Mister Romance that's given him nearly mythical status among his clientele? She intends to find out, but getting answers prove to be elusive, especially since Maxwell Riley isn't exactly gushing with information, personal or otherwise. But Eden's all in, even if it means agreeing to three dates with Max--three dates that he believes will have her falling for him...

I'm sorry, but Ethan's been knocked down a spot on my list of ultimate book boyfriends and replaced by Max. Goodness, the man was so damn swoon-worthy, I would have lost consciousness from all that heart and heat had an old-fashioned fainting couch been at my disposal. Max's mantras about kissing being more meaningful than sex and how romance isn't a mere precursor to sex made me wish he were real so scientists could harvest his close to perfect (especially because he knows his faults and makes amends) DNA and make clones of him, maybe with variations, just so we have choices. Can you tell how much time I've spent considering this? Um, yeah. Moving on...

Eden was a no-nonsense kinda gal, but you could easily see how much she loved her younger sister Asha and how devoted they both were to their grandmother, Nannabeth, and the memory of their late mother. She also didn't believe in love, calling romantics as part of the "Love Cult". She gave Max a run for his money, but don't think that Max just rolled over for her. Nope, these two had a lot of back and forth and boy, was it good. Not only was it entertaining as hell, but it also gave you something to think about, especially since the stuff Max was saying wasn't the sort that a lot of male main characters I've come across are too willing to share with their female counterparts.

Mister Romance was such a freakingly adorable and hilarious yet touching story and Eden and Max were just...le sigh. Moby was a quacker of a bonus. Their tale of wariness and mistrust that evolved--begrudgingly so--into love and all the make-my-insides-feel-all-squishy-and-fluttery emotions that come with it was a refreshing change from the norm, aka a lot of the stuff that I've been reading over the past years of my life (and if you knew how old I was, you'd know that's a butt-load of books). Leisa Rayven has me perfectly sated with this rarity of a romantic comedy gem, and I shudder to think of how incomplete lives would be it's missed out on. This is a five-plus-starred favorite. ♥