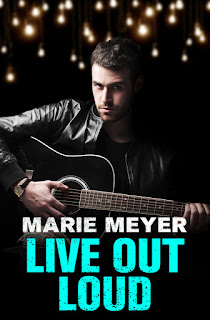 After reading Live Out Loud, I couldn't help but wonder to myself why the hell I hadn't read anything of Marie Meyer's prior to this latest release of hers. Yes, I was quite impressed, and no, this won't be my first and last Meyer read. Also, I hope this spawns a couple of spin-offs for two supporting characters or maybe it's the beginning of a series, but I'll get to that later in my review. I've read more than my fair share of rock star romances before, and I've even read a couple involving one of the main characters being hearing impaired, but I loved how the author gave her protagonists, twenty-four-year-old car mechanic slash rock star in the making Thorin Kline and twenty-six-year-old pharmacology graduate student and YMCA volunteer Harper King, such personality and individuality, that it was a struggle not to fall in love with either one of them and be as invested as I was in their beautiful love story.

Harper lost her hearing at such an early age that she has no memories of her all too few years of having been able to hear. She's more than learned to adapt; she's thriving while at graduate school, even if it boggles her mother's mind why Harper would choose to live elsewhere and do things on her own. She may not be able to hear music, but she can certainly feel it, so when she goes with her best friend to a Mine Shaft concert, Harper likes what she feels. However, it's guitarist Thor who has truly captured her attention and it's obvious that his attention's been captured by her as well. Thor is a rarity--a guy who is interested in Harper as a person, and not scared off by her deafness. He's someone Harper could easily fall for. However, there are times Thor is guarded and he's got secrets he's unwilling to share with her--secrets that could jeopardize their burgeoning relationship and break their hearts.

I super loved Harper and Thor! These two may not have seemed as if they had much in common, but they actually shared certain similarities, especially when it came to having family issues. I adored how Thor went out of his way to learn sign language in order to communicate with Harper. My knowledge of ASL is limited to the alphabet and a few basic signs like "I love you," "Thank you," and "I'm sorry," as well as one full song that I taught my preschool class when I was still teaching years ago, so I could only imagine that communicating in full sentences wasn't all that easy for someone who didn't know anything about it to begin with. Clearly, this wasn't some temporary thing as far as Thor was concerned, even if he didn't fully realize it in the beginning. This story did inspire to learn even more ASL because I think learning to communicate in other ways is always a good thing. So why not go do it, right?

This was, for all intents and purposes, about Harper and Thor, both as individuals and as a couple, but there were also some memorable supporting characters. Harper's father and his talk with Harper during his birthday brought me to tears, and Thor's mother loved her son but she was also frustrating to a certain degree. Then there are Thor and Harper's respective best friends, Griffin Daniels and Chloe--whose last name I can't recall being mentioned. Griffin sounds like he's pining for one particular girl and Chloe looks like she needs a good guy in her life, so while I'm not necessarily hoping they get a story together, I am hoping that they'll get their own stories somewhere down the line. That's how much of an impression they made on me. I truly adored Live Out Loud, and the only reason I hesitate to give it five-plus stars is I felt the issue with Thor's father wasn't fully resolved, so five stars it is! ♥