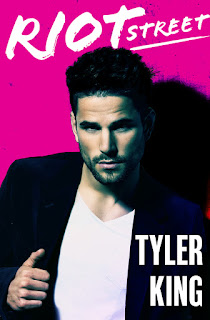 “This whole time,” I tell him, hugging my chest against the cold, “I’ve been waiting for that day I wake up and I’ve almost forgotten to miss you, but it doesn’t come. No matter how hard I pretend it will.”

When an author amazes you with their debut release, the stakes are even higher when it comes to their sophomore effort. Tyler King more than impressed me with The Debt, and while reading and reviewing her second novel was a no-brainer, my expectations were astronomically high. So, did Riot Street live up to said expectations? Why, yes. Yes, it did, and in a way that has me already antsy for more from this clearly gifted storyteller. This was the tale of two people who were connected to each other even before they actually met face to face. Their romance has layers upon layers of complexities, which made it far more interesting than your run-of-the-mill tropes that can easily be found by browsing bookshelves--digital or otherwise. Once again, King delivers with an absolute winner that made me think and feel and made me cheer on two imperfect people who were meant to be.

Avery Avalon graduated with a degree in journalism a year ago and while her peers have bylines in other publications, she's hoping to finally get her shot by way of Riot Street, a magazine both digitally and traditionally published with an extremely strong and loyal following. Her greatest advocate comes in the form of Ethan Ash who, only four years out of journalism school, has made a name for himself in reporting news and writing two bestselling novels, one of which was a story that Avery knows all too well. She's wary of him, wondering if he's after yet another tale for him to tell about her and her family and what sort of infamy it'll lead her way. But there's something else that's undeniable--Avery is as drawn to Ethan as he is to her, and it's one that could prove to either be disastrous or delectable...or both. When their respective demons come to a head, will anything be left of them?

Ethan may have been this gorgeous journalist, but there were a number of times that the man proved that he very much flawed, and some of those flaws would have made a lesser man seem like a complete loser. In his case, though, I confess that there was something about him that made me want to fix him. One of his vices was pretty much noticeable, and it was already hinted at by some of the peripheral players, which made it a teeny, tiny bit odd that Avery didn't see it until it was too late. Maybe she chose to turn a blind eye to it, or maybe she didn't notice what was familiar to someone like her in someone she had fallen so completely in love with. After all, there are times when we're too close to a situation to get a truly clear, good look at it without prejudice. But these flaws--these imperfections both Ethan and Avery have are what make them such rich characters that more can relate to.

One of my favorite things about this book were the added elements of suspense that the author added to the mix. Ethan and Avery are, after all, journalists, and being able to not just see them engage in the more mundane tasks of their jobs but to see them in the thick of the action when news breaks was exciting. Factor in the fact that they become far more involved in said breaking news and everything is heightened. Then there are the more personal aspects of their lives that made them feel more real as characters, especially Ethan, who may have started the story as an ambitious writer slash journalist but by the end was a man who was dealing with personal demons that were far more difficult to slay. Both he and Avery evolved astonishingly well, proving that there was more depth to them than I may have thought possible. Two books in and Tyler King still impresses. Five-plus stars for Riot Street. ♥