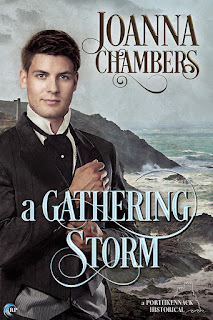 Why was it that Nick never seemed to get bored looking at Ward? He had the same features as everyone else, two eyes, a nose, a mouth. Brow and chin. What was it about the particular configuration of Ward’s face that fascinated Nick so much he could just lie here all morning and stare at the man?

Oh my. I loved A Gathering Storm! This historical romance, which is the second release in the multi-authored Porthkennack series and the first historical one to knack, was such a pleasurable surprise and has definitely made me sit up and take even more notice of this series. I like that there's going to be this mix of contemporary and historical tales to tell, each one set in this town in Cornwall called Porthkennack. Joanna Chambers first offering introduces us to twenty-six-year-old scientist Sir Edward Fitzwilliam and twenty-five-year-old Roscarrock steward Nicholas Hearn. Ward builds a home in Porthkennack due to the weather conditions that fit in well with the experiments he hopes will yield results in his quest to communicate with those beyond the veil. Nick's Romany heritage has some suggesting he would make a good candidate for said experiments. While not exactly a willing volunteer, Nick soon finds himself intrigued, not just by one man's quest for answers but the man himself. But will Nick and Ward be able to overcome all their differences or get swept aside by a relentless storm?

I seriously didn't see how Nick and Ward would work out as a couple, especially since they didn't really seem to fit, but I so fell in love with these two as they found common ground and grew to trust each other the more time they spent together. Ward's experiments had me very much interested, especially because he was a scientist and the motivation behind said experiments didn't really have much to do with satisfying his scientific curiosity. Both Ward and Nick were still missing the most important people in their lives--Ward his twin brother and Nick his mother, both of whom have already passed away--and somehow they find solace and home in one another. Of course, the story was set in a time that two men being together intimately was a punishable crime, so these two couldn't exactly be out and open. However, can I just say that I was all swoony over the subtle looks and touches and then fervent kisses shared by the cliffside after the whole episode with Snowflake? Le sigh. I truly adored A Gathering Storm, ranking it among my favorite historical romance reads over the past few years. I'm giving this five-plus stars. ♥