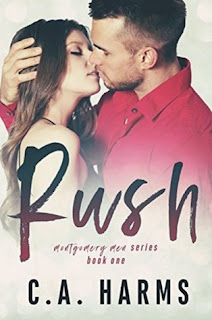 Rush is the first in author C.A. Harms new contemporary romance series about three brothers, Montgomery Men, and it starts off on the right--and quite sweet and sexy--foot with the story of the eldest Montgomery, twenty-nine-year-old millionaire businessman Ashton. He shares his tale with a woman who introduces herself as Kiera Masterson but was actually Kinsley Hellman, a woman whose life changed at twenty-two after her beloved father's health took a turn for the worse and her abusive husband and his father took control of her father's finances and medical decision-making. Five years later, she learns a painful truth and makes her escape. With her new identity and altered appearance, she can't afford to get too close to anyone. However, Ash Montgomery always gets what he wants and he wants the woman he knows as Kiera more than he's ever wanted any other woman before. He's all in with her, but he can't help but feel she's hiding something from him. If there's one thing Ash doesn't like, it's being lied to. Can what they have be real if Ash isn't sure if the woman he's quickly fallen for is who she says she is?

Oh my. This is my favorite C.A. Harms read so far! I loved reading about Ashton and Kinsley developed as main characters, becoming better versions of themselves once they had found each other. Ash was very much an alpha hero, but there was much more to him than being an in-control millionaire who's used to people tripping over themselves to do his bidding. The man had a caring heart and loved his family beyond measure. Kinsley was like the missing piece of the puzzle. Speaking of Kinsley, I think that her being Kiera allowed her to bring back that self-assured side of herself that she lost while she was still with Jase Hellman. She was courageous, and just like Ash, her love family was unquestionable. I get why she had to keep her identity and her past a secret, and there was a point where I was a bit frustrated with Ash because of how he was treating her when the truth did come out. I liked how everything was resolved because it wasn't what I had expected and when an author is able to surprise me that way, they get bonus points in my eyes. Rush garners five stars and I can't wait to read the next book, Heat. ♥