Review: Pieces of Me by Melanie Hansen (Spectrum Nights #1) 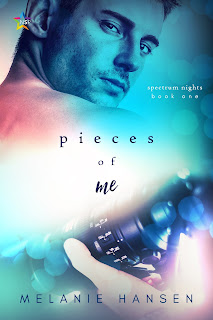 I read and fell in love with Melanie Hansen's first series, Resilient Love, and with the release of the first novel in her brand new series with NineStar Press, Spectrum Nights, I'm reminded of why she was such a standout author for me. Pieces of Me is a hauntingly beautiful introduction to the main characters of the series, Scott Ashworth and Rylan Mahoney, and how they first became a part of each other's lives when Scott was seventeen and Rylan sixteen as stepbrothers. His toxic relationship with his alcoholic mother and the constant reminder that he wasn't good for anything more than his attention-grabbing gorgeous looks had Scott believing early on that he wasn't going to amount to much. All he was was a pretty face, so he took whatever advantages he could with whatever little he had. When he learns his mother has married a trucker who has a teenage son, Scott scoffs at the idea that this is going to end happily for any of them. Nearly eighteen years of being the son his mother hates has helped him to be anything but delusional. But his new stepbrother makes him feel hopeful, not for a happily-ever-after for their new family, but for the possibility of maybe, just maybe, Scott feeling something close to happiness for now.

When Rylan entered the picture, Scott had someone who was on his side for the first time ever. They fostered a friendship, accepting one another for who they were, with Rylan happy that his new stepbrother was okay with his being gay and Scott having someone to lean on. But soon they aren't just sharing one bedroom--they end up sharing one bed, exploring the feelings they've stirred in each other. However, when Scott overhears something that devastates him, he makes an impulsive decision to leave their ramshackle trailer, leaving Rylan behind in the process as well. It takes six years for their paths to cross once again. They're no longer the teenagers they once were, holding on desperately for the bits of intimacy and joy they found with one another. Rylan's dream of becoming a photojournalist is his top priority and Scott is a party host for one of the most well-known and high-end gay bars in Phoenix, Arizona. Rylan's happy seeing Scott living a life very different from the one he had in Pace, Florida, having long let go of the hurt and anger he once felt after his stepbrother abandoned him. Now, they're working together, along with a chance to renew their friendship. But could what if they want to renew even more?

There was simply no way I could stop myself from becoming absolutely invested in Scott and Rylan's story. We get their past and their present and funnily, I didn't find myself looking for the six years they spent apart right off. Yes, I wondered, but I wasn't desperate for it, demanding answers to quench my curiosity. I don't know if Melanie Hansen is going to tackle those six years or give readers a longer peek at them as the series progresses, but again, I'm not exactly clamoring for it. I doubt that it was easy for either one of them, especially Scott who had no one to but himself to rely on if he wanted to survive. Their life together six years ago and their life when they meet again was more than enough to make me totally devoted to this novel the entire time I was reading it. This does end on a cliffhanger (gah!), but the synopsis for the second book is included, and what I read there has satisfied me...a bit...okay, I'm still anxious to get my hands on the next one, but my immediate fear as to what happens to Scott has been abated. This first in a series has set the bar impossibly high, but I have no doubt that the author is gearing up to give us something that'll be worth the wait. Pieces of Me was a fantastic beginning, and it easily gets five stars. ♥